It’s already known that mammals such as dogs sniff each other to decide who is friend or foe.

Now, researchers in Israel have found that humans do the same, although on a more ‘covert’ and subconscious level.

By smelling clothes with a device called an ‘eNose’, the experts found people who have similar body odours are more likely to make friends with each other.

These new results suggest that the sense of smell may play a larger role in human social interactions than previously thought. 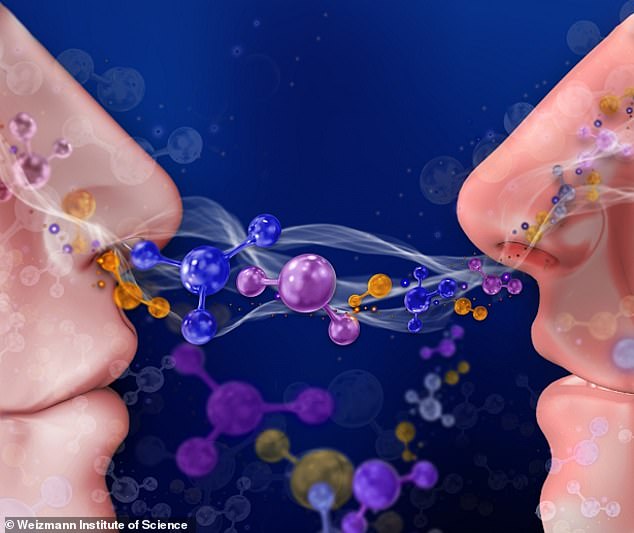 Experts have found that people tend to form friendships with individuals who have a similar body odour, by sniffing their clothes using a special device

Anyone who has ever walked a dog knows that their canine can usually tell from a distance whether an approaching dog is friend or foe.

When in doubt, upon encountering one another, the two dogs might carefully sniff each other before deciding whether to play or bark viciously.

This dominant role played by the sense of smell in social interactions has been extensively documented in all terrestrial mammals except humans.

Researchers wanted to see if this is because humans don’t use their noses in social settings the way all other mammals do, or if this behaviour done by humans but covertly.

The new study was conducted by experts at the Weizmann Institute of Science in Rehovot, Israel and published in the journal Science Advances.

‘Because humans seek friends who are similar to themselves, we hypothesised that humans may smell themselves and others to subconsciously estimate body odour similarity, which, in turn, may promote friendship,’ the authors say.

‘Perfect strangers may begin to interest us at first sniffs rather than at first sight alone.’

It’s already known that people tend to become friends with others who are similar to themselves in appearance, background, values and even in measures such as brain activity, past studies suggest.

So the researchers hypothesised that humans use their noses in social settings just like other terrestrial mammals, but in a covert way, rather than overt.

According to the team, we subconsciously sniff ourselves and others, make subliminal comparisons and then gravitate toward others who smell like us.

To prove this, the team recruited pairs of ‘click friends’ – same-sex non-romantic friends whose friendships had originally formed very rapidly (friends who had ‘clicked’).

Researchers collected body odour samples from the click friends and conducted two sets of experiments to compare the samples with those collected from random pairs of individuals. 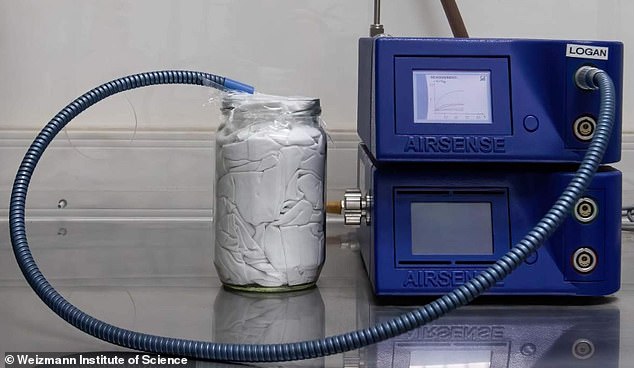 By smelling clothes with a device called an ‘eNose’ (pictured), the experts found people who have similar body odours are more likely to make friends with each other 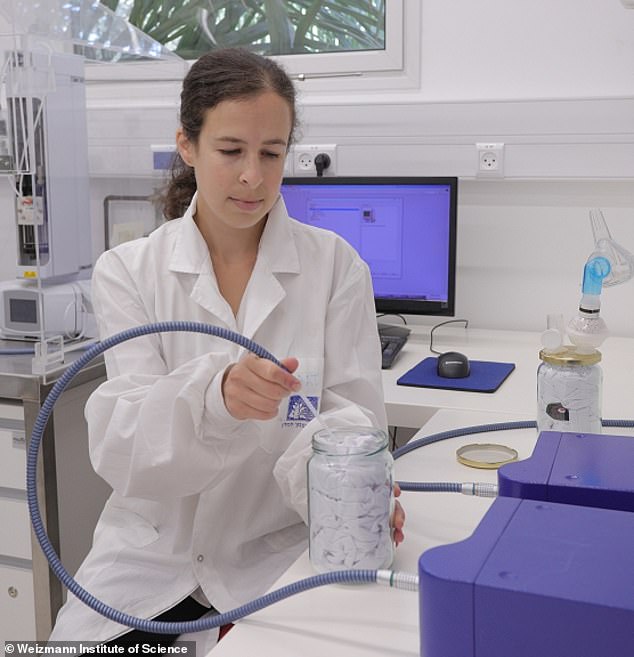 Couples from Scotland gave body odour samples both with and without fragranced deodorant, with other participants then ranking pairs of smells by similarity.

Researchers not only found that we are attracted to people with similar odours to ourselves, but that certain contraceptives can alter this perception.

In the first set of experiments, they used a device known as an electronic nose or eNose, which assessed the chemical signatures of each pair’s odours on their t-shirts.

Their eNose was fitted with 10 metal oxide sensors, each coated with a different material to detect specific chemicals.

In the second experiment, they asked other volunteers to smell the two groups of body odour samples in order to assess similarities measured by human perception.

In both types of experiments, click friends were found to smell significantly more like each other than the individuals in the random pairs.

Next, the team wanted to rule out the possibility that body odour similarity was a consequence of click friendships, rather than a contributing cause.

For example, there was a chance friends had a similar smell because they ate the same types of food or shared other life experiences that influence body odour.

To do this, they performed an additional set of experiments, in which she used an eNose to ‘smell’ a number of volunteers who were complete strangers to one another, and then asked them to engage in non-verbal social interactions in pairs.

This non-verbal interaction involved the Mirror Game, where they stood facing each other less than two feet apart and tried to mirror each other’s hand motion. 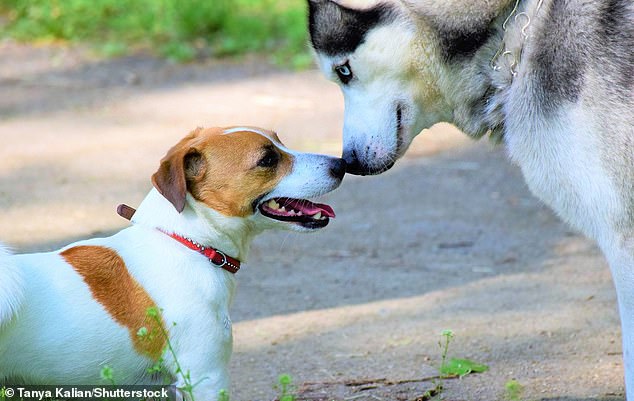 ‘This short distance enabled them to smell each other (mostly subconsciously), as happens also in a daily conversation,’ study author Inbal Ravreby told MailOnline.

After each such interaction, the participants rated the other individual in terms of how much they liked that person and how likely they were to become friends.

Subsequent analysis revealed that the individuals who had more positive interactions indeed smelled more like each other, as determined by the eNose.

When they entered the data into a computational model, researchers were able to predict with 71 per cent accuracy which two individuals would have a positive social interaction, based on eNose data alone.

Because of this, researchers think body odour contains information that can predict the quality of social interactions between strangers, and if they could become friends.

The researchers say humans form a body odour ‘template’ of themselves and then subconsciously compare to this template.

‘Previous body odour studies indeed support the idea that self-referent processing may mediate body odor identification in humans, as it does in other primates,’ they conclude.

HOW DO WE SMELL? (VERY WELL, THANKS)

These are found in a small patch of tissue high inside the nose.

These cells connect directly to the brain.

Each olfactory neuron has one odour receptor.

Microscopic molecules released by substances around us – whether it’s coffee brewing or pine trees in a forest – stimulate these receptors.

Once neurons detect the molecules, they send messages to our brain, which identifies the smell.

There are more smells in the environment than there are receptors, and any given molecule may stimulate a combination of receptors, creating a unique representation in the brain.

These representations are registered by the brain as a particular smell.

The first pathway is through our nostrils.

The second pathway is through a channel that connects the roof of the throat to the nose.

If the channel is blocked, such as when our nose is stuffed up by a cold or flu, odours can’t reach the sensory cells that are stimulated by smells.

As a result, we lose much of our ability to enjoy a food’s flavour.

In this way, our senses of smell and taste work closely together.

Without the olfactory sensory neurons, familiar flavors such as chocolate or oranges would be hard to distinguish.

Without smell, foods tend to taste bland and have little or no flavour.

Smell is responsible for our brain registering flavour, while the five tastes – salty, sweet, sour, bitter and umami – register on the tongue.

Our sense of smell is also influenced by something called the common chemical sense.

This sense involves thousands of nerve endings, especially on the moist surfaces of the eyes, nose, mouth, and throat.

These nerve endings help us sense irritating substances – such as the tear-inducing power of an onion or the refreshing coolness of menthol.

Source: US National Institutes of Health