How does YOUR town stack up? UK’s best areas for mobile coverage are revealed – with Camden, Brent and Watford topping the list

Poor mobile coverage is an issue that many Brits regularly must contend with.

Now, experts have revealed the UK’s best and worst areas for coverage – with seven out of the top ten areas in London.

Camden, Brent, Watford and Redbridge were revealed as the areas with the best coverage, while Derry City and Strabane, North Ayrshire and the Shetland Islands were the worst.

‘Mobile networks are constantly evolving and improving as years go by, as more networks put up masts around the country, improving the scope and quality of mobile coverage,’ said Ben Branson, CEO of Fonehouse.

‘Even so, there are still areas where coverage is weaker than others as the roll-out has been hampered by technology availability.’ 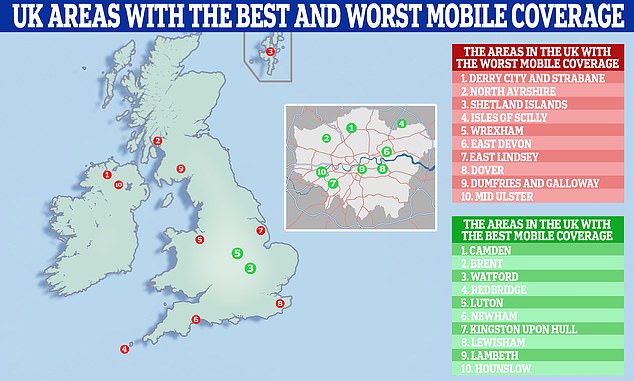 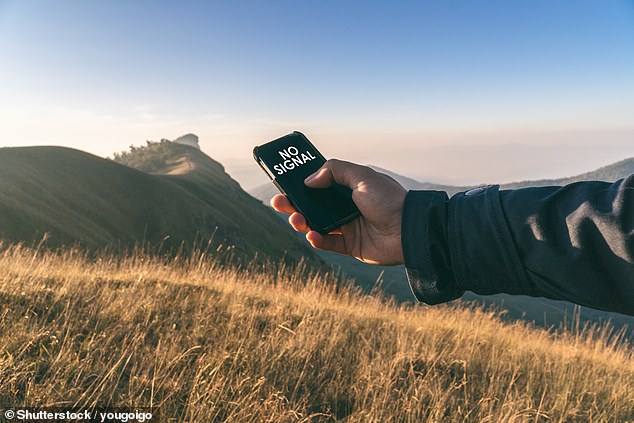 Poor mobile coverage is an issue that many Brits regularly must contend with. Now, experts have revealed the UK’s best and worst areas for coverage – with seven out of the top ten areas in London

These were then ranked highest to lowest to reveal the best and worst areas.

Areas with the best mobile coverage

Areas with the worst mobile coverage

The results revealed that Camden, Brent, Watford, Redbridge and Luton top the list as the areas with the best mobile coverage.

These were closely followed by Newham, Kingston upon Hull, Lewisham, Lambeth and Hounslow.

At the other end of the scale, Derry City and Strabane emerged as the area in the UK with the worst mobile coverage, followed by North Ayrshire, Shetland Islands and Isles of Scilly. 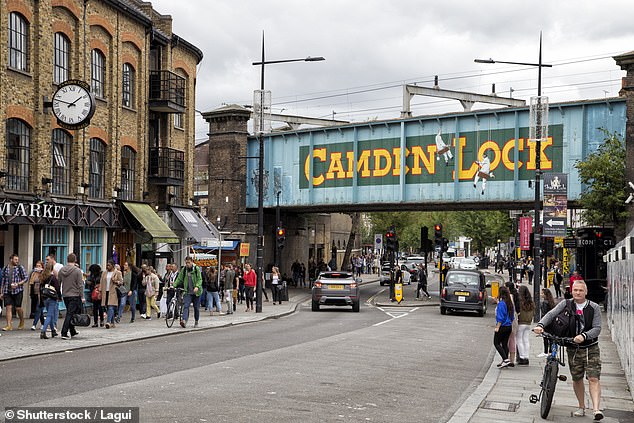 Camden (pictured), Brent, Watford and Redbridge were revealed as the areas with the best coverage, while Derry City and Strabane, North Ayrshire and the Shetland Islands were the worst

At a regional level, it will probably come as no surprise that London is the best region for mobile coverage, according to the Fonehouse.

However, it’s not such good news for Scotland and Northern Ireland, which were named as the two worst regions for mobile coverage.

‘5G has come a huge way since it was first released, with a much wider range of compatible handsets, available areas and networks offering it,’ Mr Branson added.

‘The latest devices that feature newer 5G chipsets, such as the iPhone 13 and Samsung Galaxy S22 will benefit from the fast network roll-out for 5G across the UK.’

The research comes shortly after Protect Your Bubble revealed the best and worst UK areas for broadband.

WHAT ARE THE PLANS TO SUPPLY THE WORLD WITH INTERNET?

Internet access was declared as a basic human right in 2016 by the United Nations.

However many people around the world struggle to get online due to a lack of infrastructure or extortionate costs.

Worldwide, 3.8 billion people remain without fast and reliable broadband service, according to the application.

Several companies have since launched endeavours to provide coverage around the world.

Amazon has launched Project Kuiper which it describes as ‘a long-term initiative to launch a constellation of Low Earth Orbit satellites that will provide low-latency, high-speed broadband connectivity to unserved and underserved communities around the world.’

The firm has recently filed an application with the FCC to launch more than 3.000 low Earth orbit satellite into space to help with the project.

The ROK GROUP will be launching a City Wide Wi-Fi network across 25 Indian cities.

The move comes in line with the Indian Government’s efforts to provide internet access to every Indian City.

Wide Wi-Fi Network will offer internet access across large portions of India and will be operated in association with BSNL.

It was founded with one purpose, to bring high-speed internet to India.

Elon Musk’s STARLINK project pioneers the use of low-orbit satellites to provide more efficient internet for the world.

SpaceX intends to start launching operational satellites as early as 2019, with the goal of reaching the full capacity of 4,425 satellites in 2024.

The Federal Communications Commission (FCC) have approved the plan, which just requires SpaceX to launch 50 per cent of the satellites by March 2024, and all of them by March 2027.

They are the first in a constellation of thousands of satellites, designed to provide low-cost broadband internet service from low Earth orbit.

FACEBOOK is working on plans for project ‘Simba’, named after the Lion King character, an underwater cable that will circle the continent with landings on multiple coasts.

Facebook is in talks to develop an underwater data cable that would encircle the continent, according to people familiar with the plans, an effort aimed at driving down its bandwidth costs and making it easier for the social media giant to sign up more users.

GOOGLE‘s underwater cable plans are much further along, as it has confirmed construction plans for a cable connecting Portugal and South Africa.

Google’s cable, named Equiano, will have 20 times the capacity of the most recent projects laid in the region and will first branch out in Nigeria—Africa’s largest internet market.