It’s one of the most successful Apple products of all time, and revolutionised the way we listen to music.

Now, Apple has announced it’s discontinued the iPod, more than 20 years after the very first one was released back in October 2001.

A spokesperson for the tech giant said the iPod redefined how music is discovered and listened to, and that its spirit ‘lives on’. 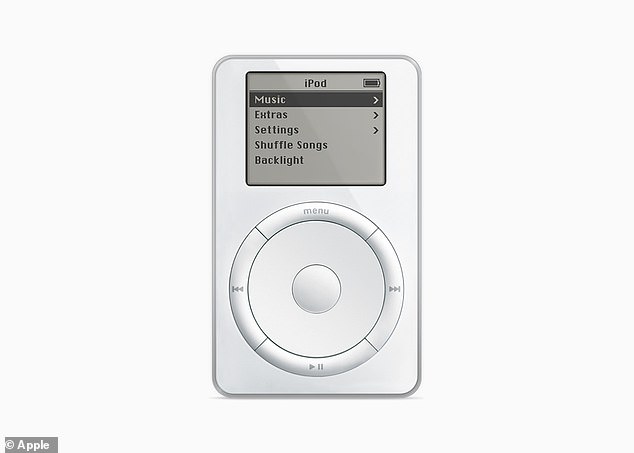 The original iPod, pictured here, was the first MP3 player to pack 1,000 songs and a 10-hour battery into a 6.5-ounce package 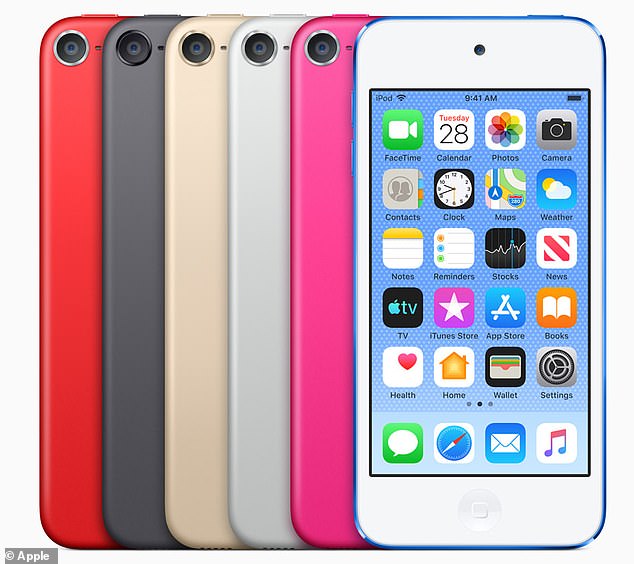 iPod Touch (seventh generation), introduced on May 28, 2019, features the A10 Fusion chip, enabling immersive augmented reality experiences and Group FaceTime, along with 256GB of storage. It’s also the final iPod model ever to be released

‘Music has always been part of our core at Apple,’ said Greg Joswiak, Apple’s senior vice president of worldwide marketing.

‘Bringing it to hundreds of millions of users in the way iPod did impacted more than just the music industry – it also redefined how music is discovered, listened to and shared.

‘Today, the spirit of iPod lives on. We’ve integrated an incredible music experience across all of our products, from the iPhone to the Apple Watch to HomePod mini, and across Mac, iPad and Apple TV.

The most recent iPod to be released was the seventh generation iPod Touch, released in May 2019, while the very first iPod model, with its mechanical scroll wheel and white front, was the first MP3 player to pack a mind-blowing 1,000 songs.

Described by Fortune as ‘Apple’s 21st-Century Walkman’, the original iPod was said to be developed in less than one year and unveiled on October 23, 2001 at a price of $399 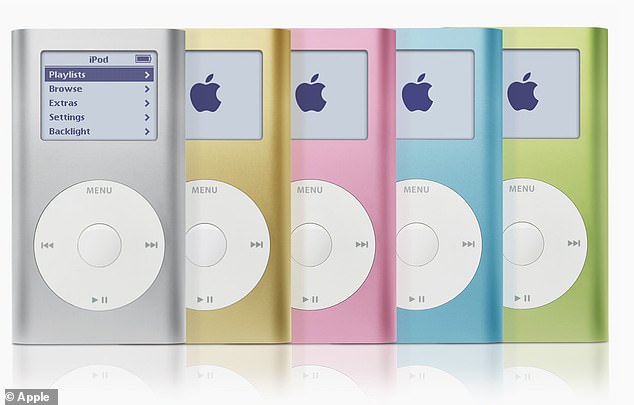 iPod shuffle (4th generation), introduced on July 15, 2015, offered a sleek design with up to 15 hours of battery life, 2GB of storage good for hundreds of songs, and a VoiceOver button to hear a song title, playlist name, or battery status

Described by Fortune as ‘Apple’s 21st-Century Walkman’, the original iPod was said to be developed in less than one year and unveiled on October 23, 2001 at a price of $399.

Also among the most memorable iPod models was the iPod Mini, introduced in February 2004, which had a smaller design and came in a range of colours.

The iPod Shuffle, meanwhile, which was first released in January 2005, came without a display and was the smallest model in the iPod family.

The iPod Touch can even make phone calls, rendering the iPod effectively redundant in the face of Apple’s all-powerful iPhone.

Apple’s announcement, made on Tuesday, led to an outpouring of fond memories on social media from former iPod owners.

‘It got me into the Apple ‘universe’ at 15. It’s what made me buy my first Mac three years later, which started my career as a designer.

Another Twitter user, @NikiasMolina, simply said: ‘Thank you for changing the world iPod.’

Fans are already snapping up the last of the iPod Touch devices still being sold, possibly to keep them in their packaging and turn them into collectors items.

Twitter user @EthanSteury said: ‘Since Apple is discontinuing the iPod, I bought one.’

THE TRILLION DOLLAR RISE OF APPLE

The company’s journey to the summit of the technology industry has been a rocky one, having seen Jobs (pictured right in 1976) leave the firm in the mid-1980s after his pet project, the first Macintosh computer, struggled and he attempted to oust then chief executive John Sculley. Wozniak is pictured left

1976: Founders Steve Jobs, Steve Wozniak and Ronald Wayne created the company on April 1 1976 as they set about selling computer kits to hobbyists, each of which was built by Wozniak.

The first product was the Apple I.

1977: Apple released the Apple II in June, which was the first PC made for the mass market.

1984: The Macintosh was introduced during an ad break for the Super Bowl and later officially unveiled during a launch event. It was discontinued a year later and Jobs left the firm.

1997: Apple announces it will acquire NeXT software in a $400 million deal that involves Jobs returning to Apple as interim CEO. He officially took the role in 2000.

The then Chief Executive Officer of Apple, Steve Jobs, with the iPhone

2011: Jobs resigned in 2011 due to illness, handing the CEO title to Tim Cook. Job died in October from pancreatic cancer.

2014: Apple unveiled the Apple Watch. It also unveiled its first larger iPhones – the 6 and 6 Plus.

2015: After purchasing Beats from Dr Dre, Apple launched Apple Music to compete with Spotify and other music streaming services.

2016: Apple returned to its roots and announced the 4-inch iPhone SE. Meanwhile, the firm is embroiled in a legal battle with the FBI, involving the agency demanding access to the locked phone used by Syed Farook, who died in a shootout after carrying out a deadly December attack in San Bernardino, California with his wife. The court order was dropped on March 28 after the FBI said a third party was able to unlock the device.

2017: Apple introduces the iPhone X, which removes the home button to make way for a futuristic edge-to-edge screen design and a new FaceID system that uses advanced sensors and lasers to unlock phones with just the owner’s face.

2018: In a first for the company, Apple introduces new features in its latest operating system, iOS 12, that encourage users to manage and spend less time on their devices. The move was spawned by a strongly worded letter from shareholders that urged the firm to address the growing problem of smartphone addiction among kids and teenagers.

2019: In January, Apple reports its first decline in revenues and profits in a decade. CEO Tim Cook partly blamed steep declines in revenue from China.

2020: In March, Apple closes all its bricks and mortar retail stores outside of China in response to coronavirus.