For the first time, scientists have found a huge groundwater system below ice in Antarctica.

The reservoir of groundwater – water held underground in the soil or in pores and crevices in rock – lies beneath the Whillans Ice Stream in West Antarctica, they say.

Such groundwater systems are likely common in Antarctica and affect how the continent reacts to climate change – although researchers don’t know exactly how.

The discovery confirms what researchers had already suspected but had been unable to verify until now, thanks to electromagnetic techniques. 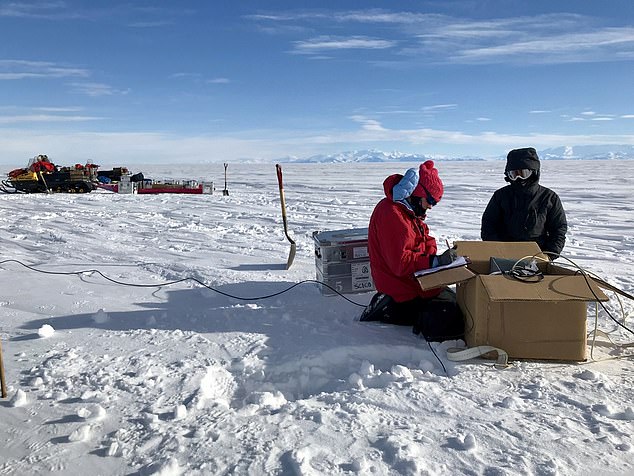 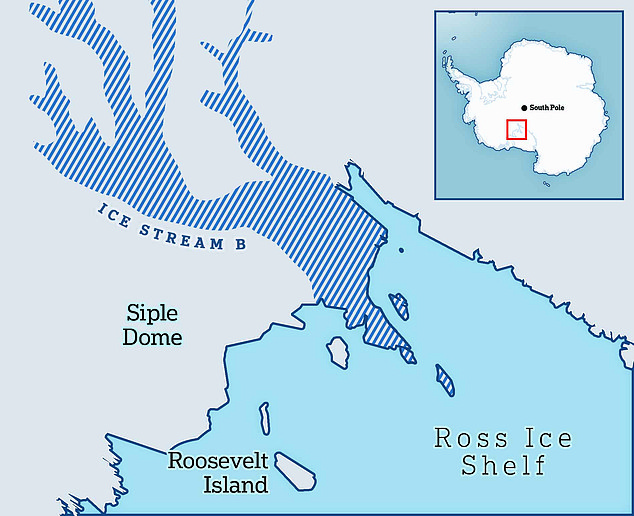 Groundwater is fresh water (from rain or melting ice and snow) that soaks into the soil and is stored in the tiny spaces (pores) between rocks and particles of soil.

It can stay underground for hundreds of thousands of years, or it can come to the surface and help fill rivers, streams, lakes, ponds, and wetlands.

A team of scientists from Scripps Institution of Oceanography at the University of California, San Diego and Columbia University’s Lamont-Doherty Earth Observatory led the study.

‘It’s been a hypothesis from our understanding of how the planet works that there’s groundwater under Antarctica, but we haven’t been able to measure it before,’ said study author Helen Amanda Fricker, a Scripps glaciologist.

Groundwater may exist under similar conditions on other planets or moons that are releasing heat from their interiors, according to the team.

‘You can imagine a frozen lid over a liquid interior, whether it’s completely liquid or liquid-saturated sediments,’ said Kerry Key, an associate professor of earth and environmental sciences at Columbia University.

‘You can think of what we see in Antarctica as potentially analogous to what you might find on Europa or some other ice-covered planets or moons.’

The existence of the groundwater reservoir also has implications for the release of large quantities of carbon that were previously stored by seawater-adapted communities of microbes. 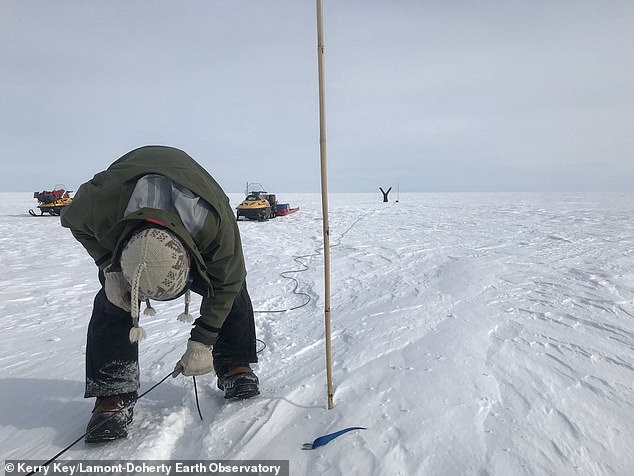 Whillans Ice Stream lies to the west of Antarctic Ice Sheet – the mass of ice covering the continent of Antarctica.

The team imaged only Whillans Ice Stream, but there are many more ice streams in Antarctica.

WHAT ARE ICE STREAMS?

An ice stream is a region of fast-moving ice within an ice sheet.

Ice streams are important because they funnel about 90 percent of Antarctica’s ice from the interior out to the margins.

Groundwater at the base of ice streams can affect how they flow, thus potentially influencing how ice is transported off of the Antarctic continent.

For their study, the experts measured groundwater during the 2018-2019 field season using a ground-based geophysical electromagnetic (EM) method called magnetotellurics.

‘In the case of water, electric charges flow more easily if there are dissolved solids in the water to help conduct the charges,’ Dr Gustafson said.

This study was the first time the method had been used to search for groundwater beneath a glacial ice stream.

The technique has been used in Antarctica since the 1990s, but those studies were aimed at imaging deep crustal features at depths well below 6.2 miles (10km).

The studies did have the effect, however, of demonstrating that scientists could use magnetotellurics on ice and snow as well, according to Dr Gustafson.

‘We took their example and applied it to a shallow question of hydrology, within five kilometers (3.1 miles) of the sub-ice environment,’ she said.

Augmenting the EM measurements was seismic imaging data, which confirmed the existence of thick sediments buried under ice and snow throughout the 60 miles.

The researchers calculated that if they could squeeze the groundwater from the sediments onto the surface, it would form a lake that ranged from 722 to 2,690 feet (220 to 820 meters) deep. 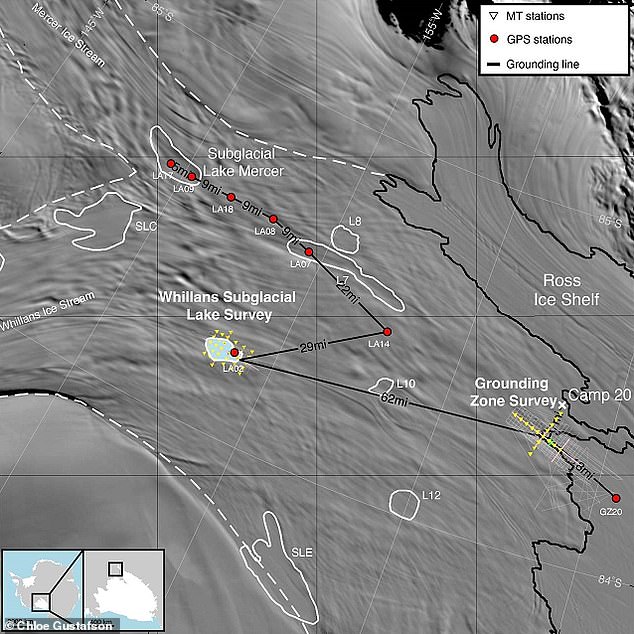 Survey locations on the Whillans Ice Stream. Electromagnetic imaging stations were set up in two general areas (yellow markings). The team traveled to wider areas to perform other tasks, shown by red dots

‘The Empire State Building up to the antenna is about 420 meters tall,’ Dr Gustafson said.

‘This is significant because subglacial lakes in this area are two to 15 meters deep – that’s like one to four stories of the Empire State Building.’

In the last decade, airborne electromagnetic techniques have been used to image shallow groundwater in the upper 100 to 200 meters (328 to 656 feet) beneath some thin glaciers and permanently frozen areas of the McMurdo Dry Valleys.

At the moment it’s uncertain how the groundwater reservoir may affect climate and in turn sea level.

Researchers will need data from all parts of the Antarctic ice sheet to understand how the system works and how it changes over time in response to climate.

The study has been published today in the journal Science.

Antarctic sea ice has reached its second lowest level in almost half a century, new satellite data reveals, as scientists warn that the melting of the West Antarctic Ice Sheet could cause global sea levels to rise by up to 10 feet.

Analysis revealed that, in March, the amount of sea ice covering the Antarctic was 26 per cent below the 1991-2020 average, particularly in the Ross, Amundsen, and northern Weddell Seas, and the lowest in 44 years.

Data from the Copernicus Climate Change Service (C3S) also revealed that last month was the fifth warmest March on record, with the global average temperature about 0.72ºF (0.4ºC) higher than the 1991-2020 average for March.