Plastic waste dumped in landfill could be cleared sooner than expected, after engineers developed an enzyme that can break it down in just a few hours.

Millions of tons of plastic is left abandoned every year, pilling up in landfills and pollution the land and waterways – typically taking centuries to degrade.

A team from the University of Texas in Austin created a new enzyme variant that can supercharge recycling on a large scale, reducing the impact of plastic pollution.

The work focusing on PET (polyethylene terephthalate), which is a polymer found in most consumer plastic including bottles, packaging and some textiles.

The enzyme was able to complete a ‘circular process’ of breaking down the plastic into smaller parts and chemically putting it back together in as little as 24 hours.

They’ve called it FAST-PETase (functional, active, stable, and tolerant PETase), developed from a natural PETase that allows bacteria to degrade and modify plastic. 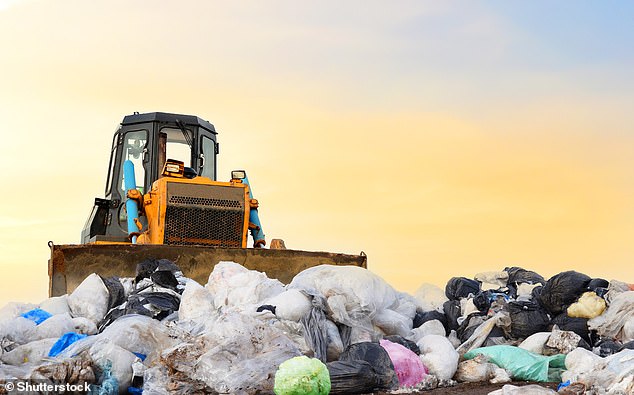 Plastic waste dumped in landfill could be cleared sooner than expected, after engineers developed an enzyme that can break it down in just a few hours. Stock image

It is able to operate in ambient temperatures, rather than extreme heat or cold, making it a viable option for tackling plastic already in landfill sites, the team said.

The enzyme has the potential to supercharge recycling on a large scale that would allow major industries to reduce their environmental impact by recovering and reusing plastics at the molecular level.

‘The possibilities are endless across industries to leverage this leading-edge recycling process,’ said Hal Alper, professor in the McKetta Department of Chemical Engineering at UT Austin.

‘Beyond the obvious waste management industry, this also provides corporations from every sector the opportunity to take a lead in recycling their products.

‘Through these more sustainable enzyme approaches, we can begin to envision a true circular plastics economy.’

The project focuses on polyethylene terephthalate (PET), one of the most commonly used plastic polymers in consumer goods, making up 12 per cent of global waste. 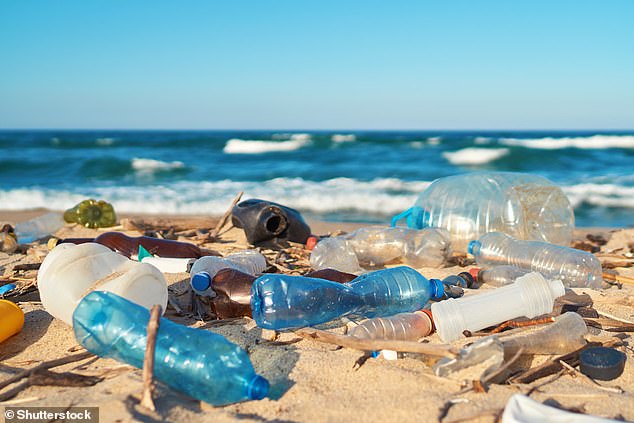 Millions of tons of plastic is left abandoned every year, pilling up in landfills and pollution the land and waterways – typically taking centuries to degrade. Stock image

The enzyme acted on the PET by breaking down the plastic into smaller parts, a process known as depolymerization, before chemically putting it back together again in the reverse process called repolymerization.

In some instances they were able to fully break down some plastics to monomers, the small mostly organic molecules, that make up the plastic, in under 24 hours.

WE INHALE UP TO 7,000 PARTICLES EVERY DAY, SHOCK NEW STUDY REVEALS

Microplastic particles are now so rife that we breathe in up to 7,000 every day, shocking research shows.

The total was 100 times higher than expected – posing a potential health threat that could rank alongside asbestos or tobacco, experts said.

The study used highly sensitive equipment to count tiny particles less than 10 microns in size – just a tenth of the width of a human hair.

The highest concentration was in the room of an eight-year-old girl because her bedding, carpet and soft toys were all made from synthetic materials.

Read more: We inhale up to 7,000 particles per day, study reveals

Researchers at the Cockrell School of Engineering and College of Natural Sciences used a machine learning to generate mutations to the naturally occurring PETase.

The model predicts which mutations in these enzymes would accomplish the goal of quickly depolymerizing post-consumer waste plastic at low temperatures.

Through this process, which included studying 51 different post-consumer plastic containers, five different polyester fibers and fabrics and water bottles all made from PET, the researchers proved the effectiveness of the enzyme.

‘This work really demonstrates the power of bringing together different disciplines, from synthetic biology to chemical engineering to artificial intelligence,’ said Andrew Ellington, who led the development of the machine learning model.

Recycling is the most obvious way to cut down on plastic waste, but globally less than 10 per cent of all plastic has been recycled, the rest ends up thrown on landfill and eventually burnt – which is energy intensive and highly polluting.

Biological solutions, including having bacteria break down the plastic, take much less energy and enzyme research has advanced significantly over the past 15 years.

However, until now, no one had been able to figure out how to make enzymes that could operate efficiently at low temperatures.

This is essential to operate at scale, and to make them both portable and affordable at large industrial scale.

FAST-PETase can perform the process at between 86 and 122 degrees Fahrenheit. 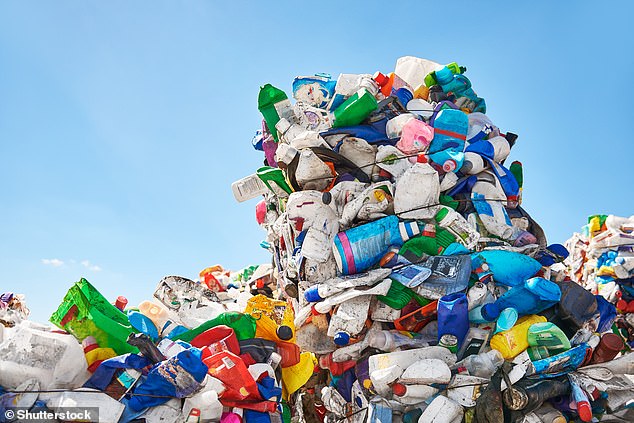 A team from the University of Texas in Austin created a new enzyme variant that can supercharge recycling on a large scale, reducing the impact of plastic pollution. Stock image

The team now plan to start work on scaling up the enzyme production, to prepare it for industrial and environmental application on real world plastic waste.

The researchers have filed a patent application for the technology and are eying several different uses, with cleaning up landfills and greening high waste-producing industries the most obvious.

But another key potential use is environmental remediation, with the hope that in future the enzymes could be sent out into the field to clean up polluted sites.

‘When considering environmental cleanup applications, you need an enzyme that can work in the environment at ambient temperature. This requirement is where our tech has a huge advantage in the future,’ Alper said.

The findings have been published in the journal Nature.

Plastic pollution is a scourge that is ravaging the surface of our planet. Now, the polluting polymer is sinking down to the bottom of the ocean.

The deepest part of the ocean is found in the Mariana Trench, located in the western Pacific Ocean, to the east of the Mariana Islands. It stretches down nearly 36,100 feet (11,000 metres) below the surface.

One plastic bag was found 35,754 feet (10,898 metres) below the surface in this region, the deepest known piece of human-made pollution in the world. This single-use piece of plastic was found deeper than 33 Eiffel towers, laid tip to base, would reach.

Whilst the plastic pollution is rapidly sinking, it is also spreading further into the middle of the oceans. A piece of plastic was found over 620 miles (1,000 km) from the nearest coast – that’s further than the length of France.

The Global Oceanographic Data Center (Godac) of the Japan Agency for Marine-Earth Science and Technology (Jamstec) launched for public use in March 2017.

It was also discovered that of all the waste found, 89 per cent of it was designed for single-use purposes. This is defined as plastic bags, bottles and packages. The deeper the study looked, the greater the amount of plastic they found.

Of all man-made items found deeper than 20,000 feet (6,000 metres), the ratios increased to 52 per cent for macro-plastic and 92 per cent for single-use plastic.

The direct damage this caused to the ecosystem and environment is clear to see as deep-sea organisms were observed in the 17 per cent of plastic debris images taken by the study.