Some dogs struggle to master ‘sit’ and ‘lie down’, but according to a new study, canines understand a whopping 89 words and phrases on average.

Researchers in Canada surveyed 165 local owners of a variety of dog breeds about the different words and phrases that their pets understand.

On average, owners reported that their dog could respond to 89 terms, with one particularly clever canine reportedly able to comprehend 215 in total.

Commands make up the majority of words to which dogs reportedly respond to, the authors found, including classics such as ‘sit’, ‘roll over’ and ‘lie down’.

However, formal training will likely be required for dogs to learn to respond to as many words as the brightest dogs, the researchers admit.

Looking at dogs by breed, herding dogs including Australian Shepherd, Border Collie and German Shepherd, and toy-companion dogs including Bichon Frise, Cavalier King Charles Spaniel and the Chihuahua, were found to respond to more words and phrases than other breed types. 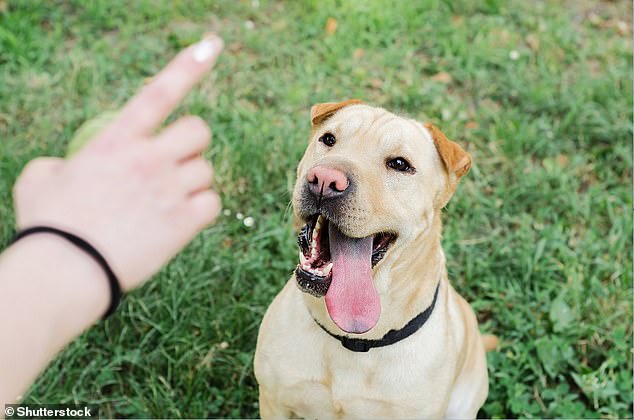 ‘Sit!’ It’s clear that the average domesticated dog understands at least a handful of words. The new research has quantified the size of the average dog’s vocabulary through a survey of owners (stock image)

The new study was conducted by Catherine Reeve and Sophie Jacques, researchers at the Department of Psychology & Neuroscience, Dalhousie University, Canada.

‘Due to their evolutionary history and close association with humans, domestic dogs have learned to respond to human verbal and nonverbal cues at a level unmatched by other species,’ they said.

‘Their ability to respond to communicative cues is critical for the numerous professional and family roles they play in our lives.

‘Based on owner reports, dogs seem to vary greatly not only in the number but also in the kinds of words to which they purportedly respond.

‘The current study is consistent with existing research suggesting that dogs may be particularly adept at responding to commands rather than object words.’

WORDS AND PHRASES THAT DOGS UNDERSTAND

Get out of the [insert name of object]

Go get your [name of toy]

Do you want dinner?

As early as 1928, scientists have sought to assess the ability of dogs to comprehend what humans say to them.

In that year, psychologists C.J. Warden and L.H. Warner documented the ability of Fellow, a young male German Shepherd, to respond to spoken commands by his owner.

Fellow was observed to respond appropriately to roughly 68 words or phrases, including phrases such as, ‘go outside and wait for me’, after which Fellow left the room and sat outside the door.

Looking at dogs by breed, herding dogs and toy-companion dogs responded to more words and phrases than other breed types. Toy-companion dogs, include the Cavalier King Charles Spaniel (pictured)

Dogs can ‘effortlessly’ learn the names of their toys, a 2021 study revealed – most likely if they’re a Border Collie.

In a sample of 40 dogs, seven were able to learn the names of their toys – like Turtle, Squirrel and Mickey Mouse – after three months of training.

One of the dogs, a Border Collie, was able to recognise the names of 37 toys.

It’s clear that the average domesticated dog understands at least a handful of words, but the researchers wanted to use a consistent methodology for a large number to work out the average.

Working with 165 dog owners of varying breeds and ages, researchers asked them to report the number of words that their dog was able to respond to and understand.

For each word or phrase, participants were asked to indicate if they believed their dog responded to that item.

Dog responses were defined as becoming excited, looking for someone or something, looking up, whining, running, wagging tail or performing the action requested (i.e. ‘sit!’).

Owners rated on a 5-point Likert-type scale what they perceived to be their dog’s level of response to that item.

Dog owners reported that their dogs responded to between 15 and 215 words and phrases, with a mean of 89, the academics found.

Looking at dogs by breed, herding dogs (bred to herd sheep and cattle) and toy-companion dogs (bred for human companionship) responded to more words and phrases than other breed types.

‘There may be breed-related differences in the number of words to which dogs may learn to respond, although additional research is necessary to determine if such differences exist between breeds themselves or between owners of different breeds,’ the team say.

The researchers admit that dogs might learn to respond in particular ways to specific words and phrases without responding to them ‘on the basis of their meaning’.

Another limitation is the study relied on surveys of owners, who may have exaggerated the extent of their pets’ responses.

A bizarre new prototype device lets dogs call their owner by picking up and shaking a ball when they’re home alone.

Devised at the University of Glasgow, the device, called ‘DogPhone’, is a toy ball containing an accelerometer – a device that detects motion of an object.

When the accelerometer senses movement, it initiates a video call on a laptop, allowing dogs to see and interact with their owner while he or she is at work.

Initially, dogs will be mystified by seeing and hearing their owner when they shake DogPhone, but they’ll soon start to associate touching it with their owner appearing.

Over time, they’ll therefore learn to pick up and shake the ball when they’re missing their owner and want to see them – via the internet at least.

With DogPhone, the human owner can also use the system to call the dog. When they do so, DogPhone makes a ringing sound, to draw the dog’s attention.

But the pooch is ‘free to answer or ignore the call’, simply by ignoring the device.