More than two decades after it was first spotted, a brightly colored Peruvian songbird has finally gotten a proper name.

Ornithologists from Louisiana State University first spotted what would be called the Inti Tanager in southeastern Peru’s Manu National Park in October 2000.

With its bright yellow feathers and distinctive black stripe, the bird’s plumage was reminiscent of Uma Thurman’s iconic track suit in Kill Bill: Volume One, and soon it earned the nickname the ‘Kill Bill Tanager.’

But it took more than a decade for researchers to find more specimens and start long the process of mapping the bird’s family tree.

Eventually they realized it wasn’t just a whole new species, but a new genus, as well. 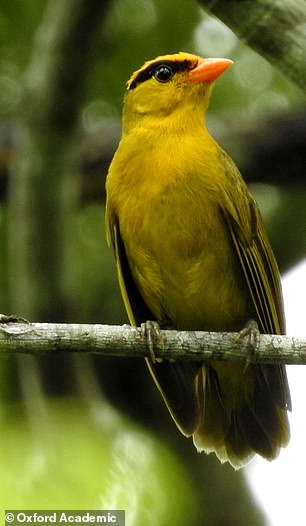 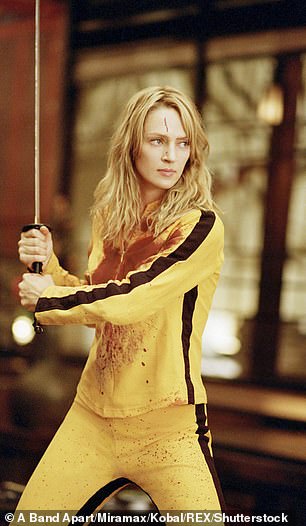 First spotted in 2000, the Inti Tanager earned the nickname ‘the Kill Bill Tanager’ because its distinctive yellow-and-black plumage is reminiscent of Uma Thurman’s outfit in the 2003 movie Kill Bill

He was quite familiar with the local avian inhabitants, so he assumed it was one of the more common birds in the area.

However, when he and fellow ornithologist Gary Rosenberg saw it through a telescope, they realized it was something new: a canary-yellow songbird with a pink bill, a bushy crest and a distinctive black stripe on its head.

‘My first wild impression was it looked like an Old World oriole, something like a Black-naped Oriole from Asia,’ Lane told the Audubon Society. ‘Since that was obviously impossible, my next thought was that it must be a tanager.’

Ornithologist Daniel Lane’s earliest sketch of an Inti Tanager, which migrates annual between Bolivia and Peru

Unfortunately, after just a glimpse, the bird flew off out of sight.

It wasn’t until three years later, when Lane and Rosenberg were leading another birding tour in the region, that they saw the tanager again.

Lane finally collected a specimen in 2004 — but with just one bird, he couldn’t determine its exact taxonomy.

Finally in December 2011, Frank Rheindt, then a graduate researcher at Harvard University’s Museum of Comparative Zoology, encountered a healthy breeding population in the foothills of Bolivia’s remote Machariapo valley, some 200 miles away from where Lane had seen the tanager in Peru.

Other ornithologists had actually visited the valley, located on the east side of the Andes, but always in the dry season, ‘when the deciduous forest had shed its leaves and bird activity was low,’ according to a statement from LSU.

Rheindt was visiting during the rainy season, when the birds were easy to spot. 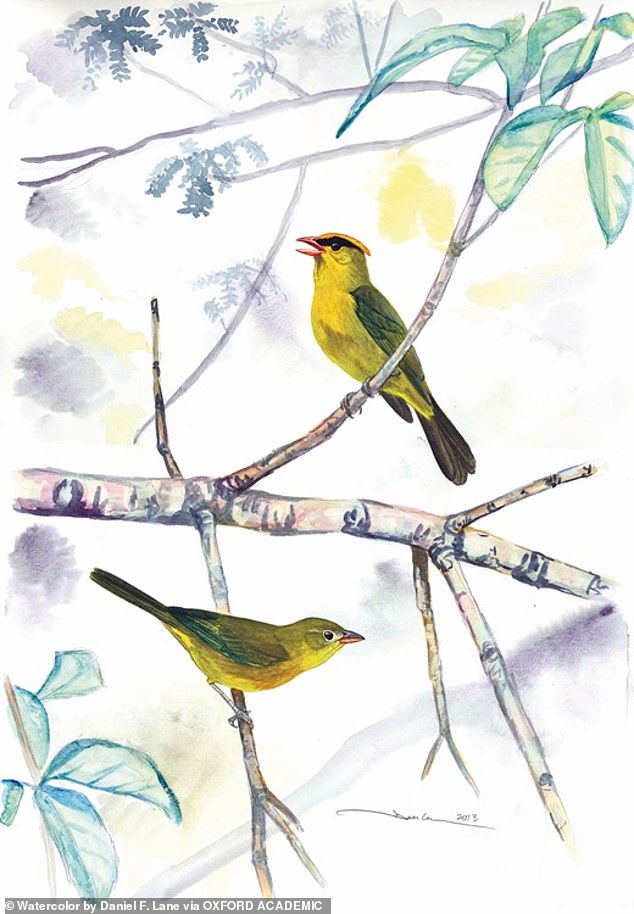 A watercolor painting of a male (top) and female Inti Tanager. Inti means ‘sun’ in the Quechua language spoken by Incans

‘That this unique, bright yellow bird could have gone unnoticed by ornithologists until recently attests to the remoteness of the areas where it lives and to the importance of continued biological surveys off-the-grid in South America,’ the researchers wrote in a paper published in the journal Ornithology.

Lane and a group of Bolivian ornithologists returned to the Bolivian site in 2019 to gather more genetic material and start mapping the tanager’s family tree.

Tanagers are among the largest families of birds, with more than 370 known species.

They represent about 4 percent of all species of birds and more than 10 percent of avians in the Neotropical realm, which encompasses Central and South America.

Nonetheless, Lane and Rosenberg’s discovery, eventually labeled Heliothraupis oneilli, is notable: according to the release, fewer than 10 new genera of birds have been described since the 1960s.

Female and male Inti Tanagers are similar, though females lack the telltale black stripe and their bills can be pink or bright orange.

The bird’s species name, oneilli, honors LSU ornithologist John O’Neill, a former director of birds at the museum who mentored both Lane and Rosenberg.

Its genus, Heliothraupis, is derived from the Greek word helios, meaning ‘sun,’ and thraupis, meaning ‘small bird’ or ‘finch.’

And its common name, Inti Tanager, reflects this phrasing as well: Inti means ‘sun,’ in the Quechua language spoken by Incans.

‘This species reminds me of the sun in multiple ways,’ said Occidental College ornithologist Ryan Terrill, who co-authored the study.

‘It often sings through the middle of the day, and so it is out in the sun,. It looks like a little sun, and it’s in the open sunny habitat,” Terill said. ‘So I thought, some derivative of ‘sun tanager’ would be cool.’ 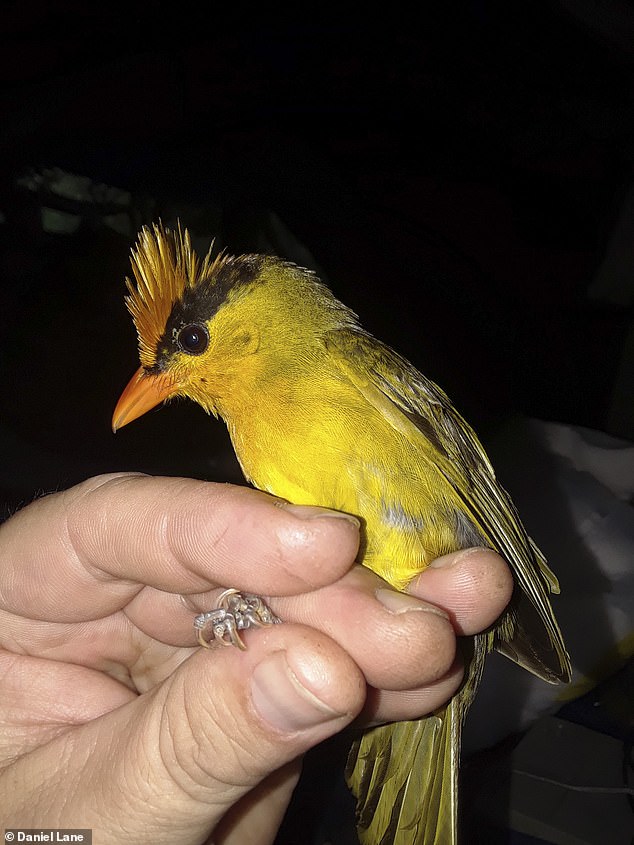 Researchers believe the Inti Tanager is migratory, but only within the tropics—a rarity among songbirds

The team came up with the name ‘sun tanager’ while sitting around a campfire in Bolivia in 2012, Terill added.

Since the Inti Tanager wasn’t spotted during the dry season, the researchers believe it’s migratory, but only within the tropics—a rarity among songbirds.

They theorize it only breeds during the rainy season in Bolivia, from November to March.

From June to November it heads west to ‘winter’ in the lower Andes in southeastern Peru, where Lane first spotted it.

That would explain why its numbers were so much concentrated in Bolivia, according to Terrill, who estimated its non-breeding habitat in Peru could be ten times vaster.