By Stacy Liberatore For Dailymail.com

Twitter continues to build out its cryptocurrency capabilities, announcing the addition of a dedicated crypto team.

The new team will be led by seasoned blockchain engineer Tess Rinearson, who said the division will ‘focus on crypto, blockchains, and other decentralized technologies.’

Twitter Crypto, according to Rinearson, will serve as a ‘center of excellence’ for all things blockchain and web3′ at the social media network.

One of the main goals of this group is to explore ways to that creators can use decentralized technologies to accept virtual currencies and goods, as first reported by the Financial Times. 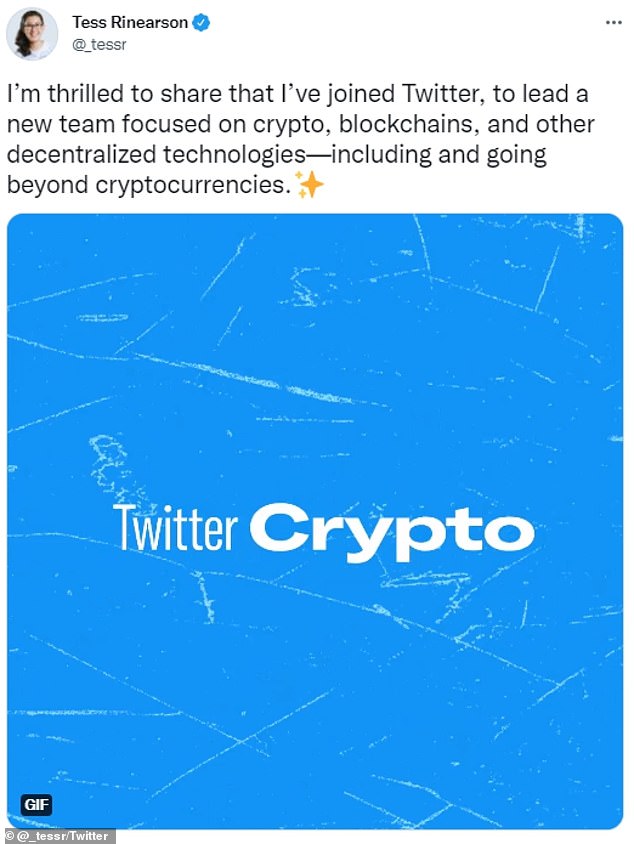 The new team will be led by seasoned blockchain engineer Tess Rinearson, who said the division will ‘focus on crypto, blockchains, and other decentralized technologies’

Dorsey’s other company, Square, integrated bitcoin into its payment model back in 2018 and announced this month that the digital currency contributed to nearly $2 billion of its 2021 third-quarter revenue.

Twitter Crypto is looking to bring a similar model to the social media platform.

‘We’ll be exploring how ideas from crypto communities can help us push the boundaries of what’s possible with identity, community, ownership and more,’ Rinearson tweeted. 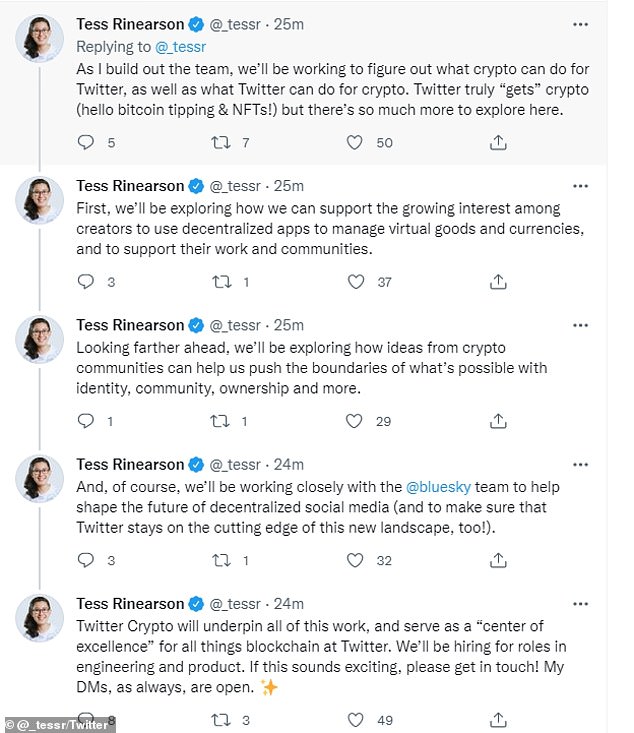 She also shares that the crypto team will be working closely with BlueSky, an open-source project the company first announced in 2019 to build a ‘decentralized standard for social media.’

BlueSky is led by Jay Graber, a startup founder and cryptocurrency developer and although it is funded by Twitter, it operates independently.

Twitter has already dipped its toes in the growing crypto space when it announced allowing users to tip their favorite creators with Bitcoin, according to a September Twitter blog post.

‘Strike is available to people in El Salvador and the US (excluding Hawaii and New York).

‘People in the eligible markets will have to sign up for a Strike account and add their Strike username to receive Bitcoin tips over the Lightning Network.

‘You can use any Bitcoin Lightning wallet to send tips to someone’s Strike account.’

When you enable Tips on your profile, you can now also add your bitcoin address, which other users can copy your address and paste into a bitcoin wallet of their choice to send you a payment directly.

WHAT IS BITCOIN AND HOW DOES IT WORK?

Bitcoin is a cryptocurrency – an online type of money which is created using computer code.

It was invented in 2009 by someone calling themselves Satoshi Nakamoto – a mysterious computer coder who has never been found or identified themselves.

Bitcoins are created without using middlemen – which means no banks take a fee when they are exchanged.

They are stored in what are called virtual wallets known as blockchains which keep track of your money.

One of the selling points is that it can be used to buy things anonymously.

However, this has left the currency open to criticism and calls for tighter regulation as terrorists and criminals have used to it traffic drugs and guns.

How are they created?

Bitcoins are created through a process known as ‘mining’ which involves computers solving difficult maths problems with a 64-digit solution.

Every time a new maths problem is solved a fresh Bitcoin is produced.

Some people create powerful computers for the sole purpose of creating Bitcoins.

But the number which can be produced are limited – meaning the currency should maintain a certain level of value.

Why are they popular?

Some people value Bitcoin because it is a form of currency which cuts out banking middlemen and the Government – a form of peer to peer currency exchange.

And all transactions are recorded publicly so it is very hard to counterfeit.

Its value surged in 2017 – beating the ‘tulip mania’ of the 17th Century and the dot com boom of the early 2000s to be the biggest bubble in history.

But the bubble appeared to have burst, and questions arose over what market there is for it long-term.