Ants are able to switch from a worker to a ‘queen-like status’ thanks to a slight tweak in a single protein in their brain, a new study reveals.

Biologists in Philadelphia isolated nerve cells from brains of the Indian jumping ant (Harpegnathos saltator), which get their name from their ability to leap a few inches.

The experts found that the protein, called Kr-h1, orchestrates ants’ transition from a standard worker, tasked with finding food, and a queen-like ‘gamergate’.

Gamergates are described as ‘queen-like’, even though they’re not queens. They’re actually workers that can reproduce in the absence of a queen in a colony. 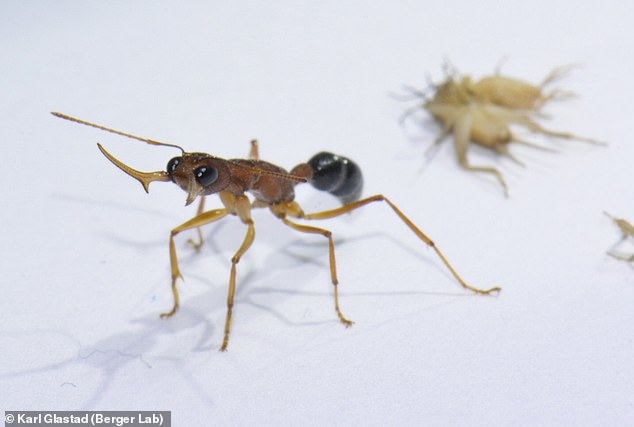 Harpegnathos saltator (sometimes called the Indian jumping ant) is found in India. A worker is pictured here in an aggressive display (open mandibles) aimed at the photographer. Gamergates can reproduce, while workers can’t

A gamergate is a worker ant that is able to reproduce sexually. Gamergates are described as ‘queen-like’, even though they’re not queens.

In the Indian jumping ant, workers have the potential to become reproductive gamergates, but this transition is inhibited by the presence of the queen.

When the queen dies, a period of intense fighting ensues, after which a few individuals earn reproductive rights.

These individuals, called gamergates, exhibit dramatic changes in social behaviour inside the colony.

However, these changes can be reversed and a newly-formed gamergate can be converted back to a worker.

The study was conducted by biologists at the University of Pennsylvania Perelman School of Medicine and published in the journal Cell.

‘Animal brains are plastic; that is, they can change their structure and function in response to the environment,’ said study author Professor Roberto Bonasio.

‘This process, which also takes place in human brains – think about the changes in behaviour during adolescence – is crucial to survival, but the molecular mechanisms that control it are not fully understood.’

In an ant colony, workers maintain the colony by finding food and fighting invaders, whereas the queen’s main task is to lay eggs.

In H. saltator, workers have the potential to become reproductive gamergates, but this transition is inhibited by the presence of the queen.

When the queen dies, a period of intense fighting ensues, after which a few individuals earn reproductive rights and become gamergates.

These gamergates exhibit dramatic changes in social behaviour inside the colony.

However, these changes can be reversed and a newly-formed gamergate can be converted back to a worker.

‘Queens are born queens,’ Professor Bonasio told MailOnline. ‘When they eclose [emerge as an adult from the pupa or as a larva from the egg] they have wings. 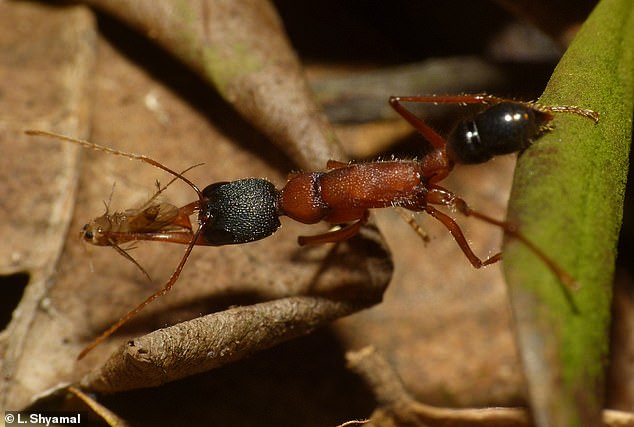 Harpegnathos saltator is pictured here with its prey in Wynaad, India. Any Harpegnathos female, adult worker can be converted into a ‘queen-like’ gamergate in the absence of the queen

‘Gamergates are born workers (no wings) and they become queen-like after a change in their social circumstances.’

ANTS USE THEIR MEMORY TO AVOID PITFALLS THE SECOND TIME AROUND

Ants are can learn to avoid danger after just one risky experience, according to a 2020 study.

The insects can link visual cues with negative experiences and memorise potentially dangerous routes, the team of authors from the University of Toulouse found.

In experiments, two ant species were tested – Melophorus bagoti from Australia and Cataglyphis fortis from the Sahara.

During a second attempt to reach their nest, the insects were found to change their behaviour to avoid falling into a pit.

As they approached the trap, some of the ants first stopped to scan their environment, before making a detour around the pit and safely reaching the nest.

Read more: Ants use their memory to help them avoid past pitfalls

It’s already known that Harpegnathos adults can switch from a worker to a gamergate, but how they do this has been more of a mystery.

To learn more, the team developed a method for isolating neurons – nerve cells – from the ants and keeping them in plastic dishes in the lab.

Isolating neurons in this way allowed the team to explore how they responded to two hormones, called juvenile hormone (JH3) and ecdysone (20E).

Both these hormones are present at different levels in the bodies of both workers and gamergates.

The researchers found JH3 and 20E produced distinct patterns of gene activation in the brains of workers and gamergates.

But the biggest surprise was that both hormones influenced the nerve cells by activating Kr-h1.

In this way, the Kr-h1 protein is a bit like a light switch, and the hormones are the forces turning it on or off.

‘This protein regulates different genes in workers and gamergates and prevents the ants from performing “socially inappropriate” behaviours,’ said study author Shelley Berger, also at the University of Pennsylvania.

‘That is to say, Kr-h1 is required to maintain the boundaries between social castes and to ensure that workers continue to work while gamergates continue to act like queens.’

‘We had not anticipated that the same protein could silence different genes in the brains of different castes and, as a consequence, suppress worker behaviour in gamergates and gamergate behaviour in workers,’ Professor Bonasio said. 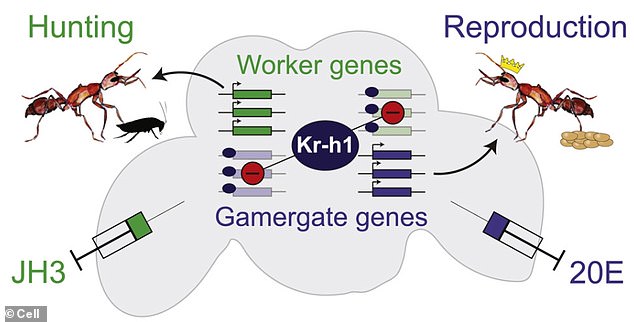 ‘We thought that these jobs would be assigned to two or more different factors, each of them only present in one or the other brain.

‘The key message is that, at least in ants, multiple behavioural patterns are simultaneously specified in the genome and that gene regulation can have a great impact on which behaviour that organism carries out.

‘In other words, the parts of both Dr Jekyll and Mr Hyde are already written into the genome; everyone can play either role, depending on which gene switches are turned on or off.’

Professor Bonasio thinks other similar proteins might have comparable functions in more complex brains, such as human brains.

‘Discovering these proteins might allow us to one day restore plasticity to brains that have lost it – for example, aging brains,’ he said.

In future studies, the researchers plan to explore the role of Kr-h1 in other organisms, as well as how the environment impacts gene regulation and, in turn, brain plasticity and behaviour.

In 2017, scientists led by Professor Roberto Bonasio genetically engineered ants to lack their sense of smell.

This affected the insects’ ability to communicate, forage or compete to be a queen, as their antennae and brain circuits failed to fully develop.

Such odours are used to spread alarm as a predator approaches, leave a trail to food, indicate social status, and signal readiness to mate.

Ants can receive such signals because they have proteins called odorant receptors on their antennae, with each protein the right shape to bind to a specific odorant chemical.

For any odour or pheromone to be processed in an ant’s brain, however, both the right odorant receptor protein and a shared, common partner protein called Orco must be present.

The team successfully engineered the genetic loss of Orco protein, which resulted in ants that could no longer perform some, if not all, pheromone-based social interactions.

Specifically, the altered young ants, unlike their nestmates without the changes, spent much of their time wandering out of the nest. They failed to interact with other members of the colony (a behaviour called ‘space cadet’), and were unable to forage and bring food back to the nest.

Also, mutant females no longer groomed males, a pre-mating behaviour. The current study focused on the Indian jumping ant, Harpegnathos saltator, which is unlike many ant species in which only the queen can mate and pass on genes to the next generation.

Any Harpegnathos female, adult worker can be converted into a ‘queen-like’ gamergate in the absence of the queen. This is because the queen secretes a pheromone that suppresses the ability of workers to mate and lay eggs.

If the queen is removed, the most aggressive females, after winning a series of antenna duels, undergo this transition, and can go on to produce progeny, which is essential for colony survival.

The 2017 study found that, without Orco, the females cannot process pheromones, which makes them much less likely to engage in dueling.