Four diaper wearing astronauts on the International Space Station are gearing up to undock from the floating space lab Monday afternoon, returning to Earth after a 200-day stay in space.

NASA’s Shane Kimbrough and Megan McArthur, along with the European Space Agency’s Thomas Pesquet and Japan Aerospace Exploration Agency’s astronaut Akihiko Hoshide are scheduled to undock from the giant orbiting laboratory at 2:05pm ET and splashdown off the Florida coast at 10:33pm ET.

The initial launch was set for Sunday afternoon, but high winds pushed the return for the Crew-2 team back one day.

The SpaceX capsule is without a bathroom, due to a faulty toilet design, and all four crew members are wearing diapers on the trip back to Earth.

However, the rescheduled mission cuts the trip from the station to Earth by 12 hours – it is only eight hours long, compared to 20 hours –  due to the path from the ship to Earth, so the team will not have to sport the protective undergarments as long as previously expected. 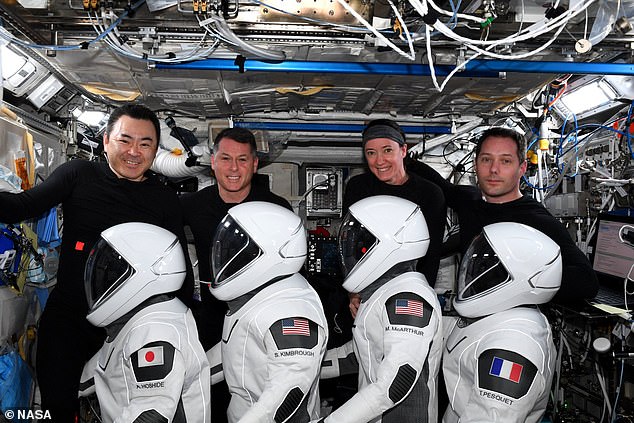 Less than 48 hours after Crew-2 leaves the ISS, the Crew-3 mission will launch from Kennedy Space Center in Cape Canaveral, Florida on November 10.

Having Crew-2 come back to Earth before Crew-3 launches is referred to as an ‘indirect’ handover, according to NASA.

The American space agency prefers a direct handover, where Crew-3 arrives before Crew-2 leaves, allowing for an overlap on the station.

A direct handover was planned on October 31, but poor weather and a minor medical issue with a Crew-3 astronaut caused a delay.

The initial launch was set for Sunday afternoon, but high winds pushed the return back a day. The capsule (pictured) is without a bathroom, due to a faulty toilet design, and all four crew members are wearing diapers on the return-trip 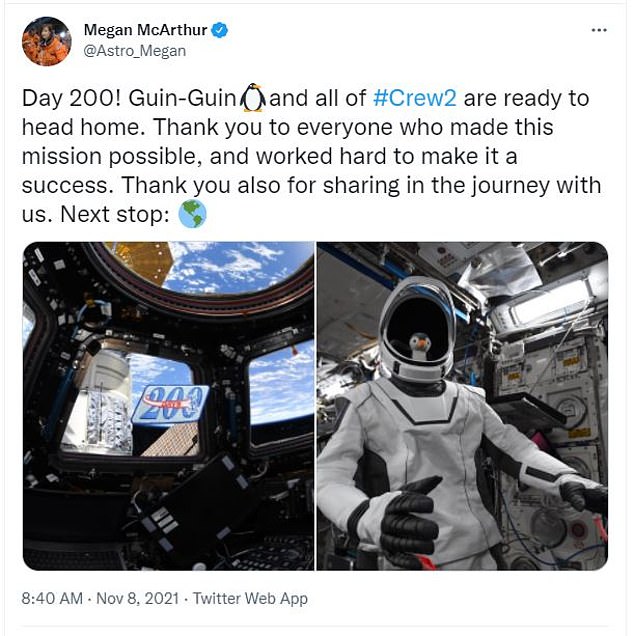 Astronaut Megan McArthur shared a post in her twitter account ahead of the crew’s return to Earth. They have spent 200 days on the International Space Station since launching to the ship in April

The toilet issue started in September when the commode aboard the Inspiration4 mission, the first all-civilian mission in space, leaked and spilled urine underneath the floor of the capsule.

Engineers, however, did not notice the trouble until the crew – Jared Isaacman, Sian Proctor, Haley Arceneaux and Christopher Sembroski – returned from their three-day journey around the Earth.

The issue stemmed from a tube that had become unplugged, which was also found aboard the Endeavour capsule, which flew SpaceX’s Crew-2 mission to the ISS back in late April.

The crew investigated the return capsule docked to the ISS by looking under the panels with video cameras to provide the NASA and SpaceX teams with data to see if their toilet was anything like that of the Inspiration4 mission.

Pools of urine were spotted during the investigation.

Steve Stich, NASA’s Commercial Crew Program manager, told reporters at an October 29 press conference after the investigation: ‘Our intent is to not use the system at all for the return leg home because of what we’ve seen with the fluids we are talking about.’ 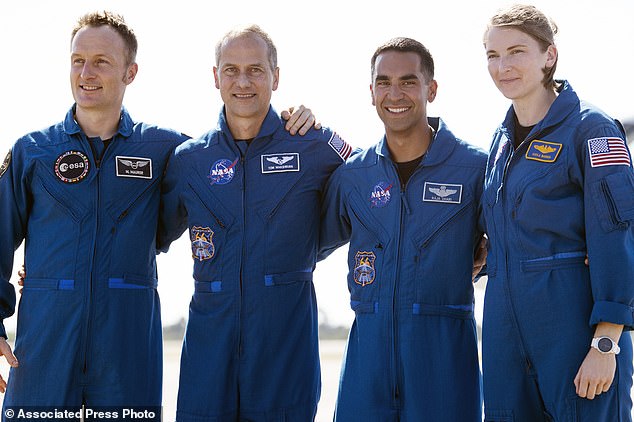 The string of delays also pushed the Crew-3 mission until Wednesday, which will see NASDA astronauts Raja Chari, Tom Marshburn and Kayla Barron, along with ESA’s Matthias Maurer fly aboard the Dragon spacecraft to begin a six-month stay in orbit on the ISS 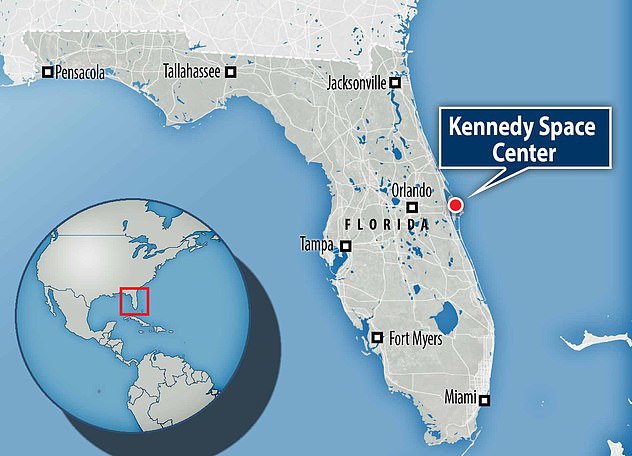 Pictured is a map showing the location of NASA’s Kennedy Space Center in Cape Canaveral, Florida

However, diapers, or undergarments are commonly used by astronauts to relieve themselves in spacesuits for launches, landings and spacewalks.

The Crew-2 return capsule is scheduled to do a fly-around maneuver after undocking.

This entails them circling the space station in the Dragon capsule while taking photos of the ISS, which has been done since the deployment of the ship.

The string of delays also pushed the Crew-3 mission until Wednesday, which will see NASA astronauts Raja Chari, Tom Marshburn and Kayla Barron, along with the ESA’s Matthias Maurer, fly aboard the Dragon spacecraft to start a six-month stay on the ISS.