How does YOUR region compare? Experts reveal the UK’s worst areas for data wastage — with Northern Ireland topping the list, where 84 per cent of people are not using their full amount each month

Experts have produced a map of the UK that reveals the extent of ‘data wastage’ — all the mobile internet allowances users pay for but don’t end up using up each month.

Northern Ireland was found to top the list, where a whopping 84 per cent of mobile owners are paying for data that they are not using, with Wales second at 80 per cent.

The lowest wastage was found in England’s North East, where 62 per cent had data left over each month, followed by Scotland (65 per cent) and London (70 per cent).

The latter is, perhaps, not surprising — compared with the rest of the country, the city and its surroundings are served by some of the best 4G and 5G availability in the country, giving users more opportunity to use data.

Researchers from SIM provider Lebara polled 2,000 UK mobile users and found a whopping 71 per cent of them were wasting their money on data they didn’t use.

In fact, only 10 per cent reported running out of data each month, with the rest either on unlimited data plans, or purchasing additional allowances.

With the average Briton spending £20 a month for a 5GB monthly data package, consumers could save from £60–£180 each year by switching to a better deal. 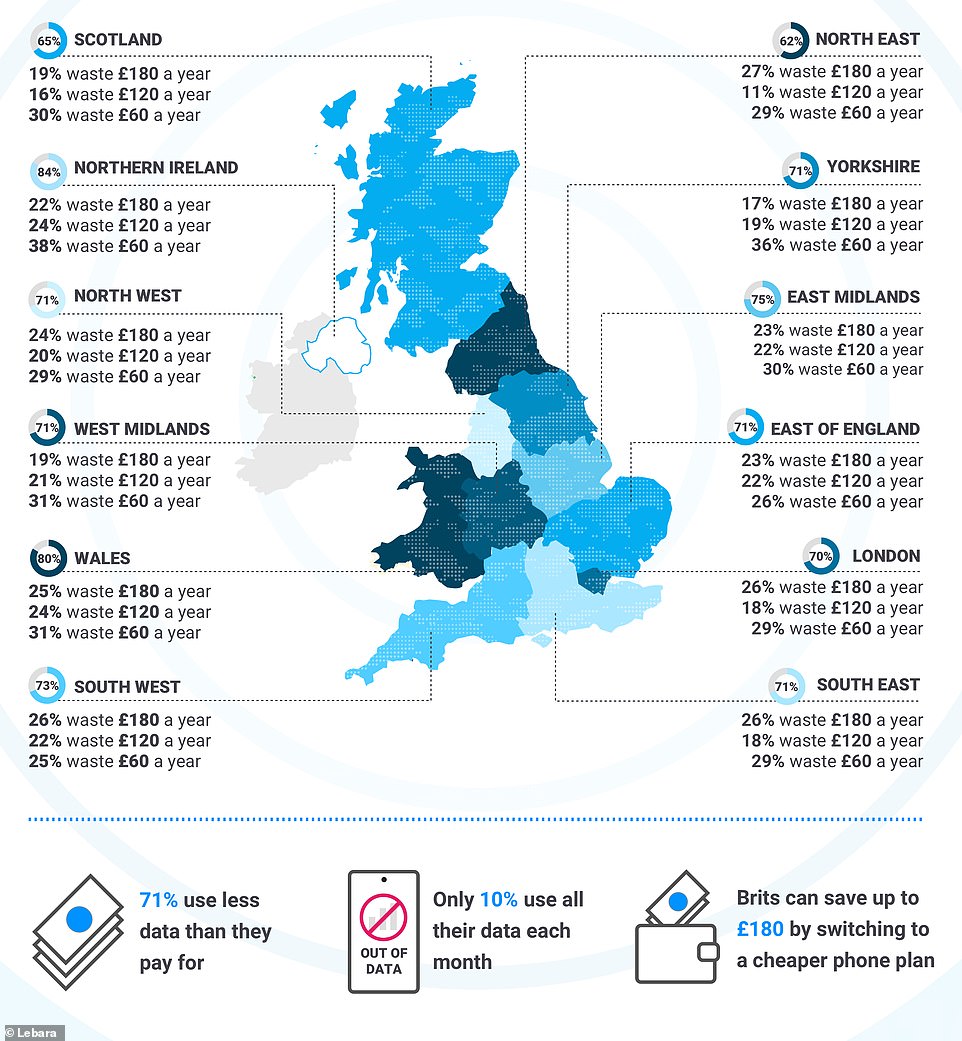 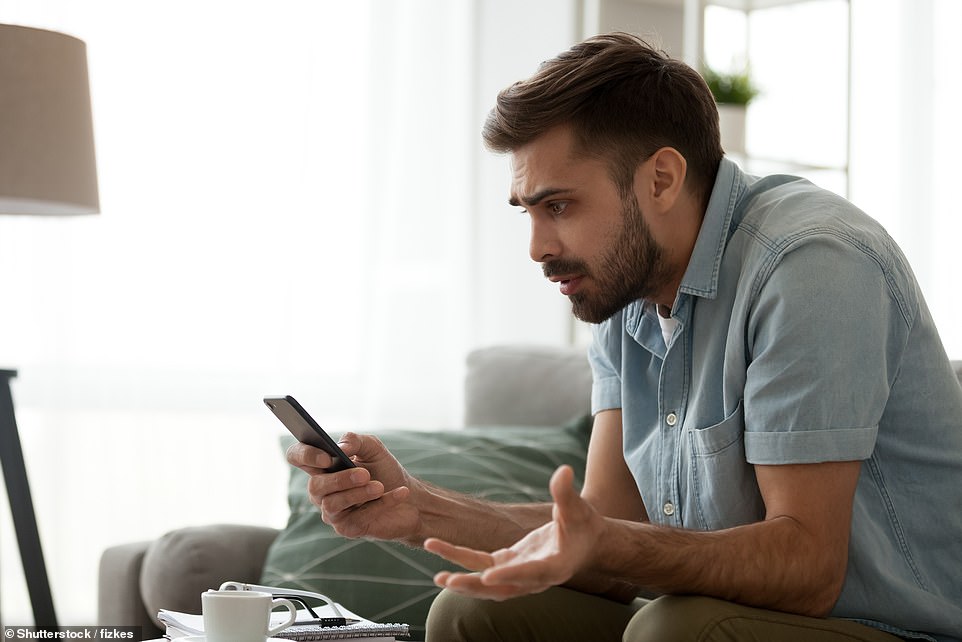 Researchers from SIM provider Lebara polled 2,000 UK mobile users and found a whopping 71 per cent of them were wasting their money on data they didn’t use (stock image)

Alongside exploring how much data is wasted, the team asked consumers where they used their phones to browse the internet the most.

They found that 48 per cent of Britons use their phones the most while also watching television.

Meanwhile, 43 per cent are on their devices the most when in bed.

And 17 per cent reported that they get in their quality mobile time while sitting on the toilet.

According to 37 per cent of the survey’s respondents, the most important aspect of being able to purchase a new phone was being able to stick to a budget.

However, the researchers said, their findings show that many mobile customers are being ‘stung’ by expensive data plans that waste money in the long run.

This trend was likely exacerbated during the pandemic — when stay-at-home orders would have meant many consumers were connecting to their home WiFi, rather than using up their data as they would if they were getting out and about.

The investigation also revealed that 32 per cent of consumers polled are stuck in two-year-duration fixed-term contracts.

This means that wasted mobile data could be costing them up to some £360 over the duration of their contract.

When their present phone plan runs out, 27 per cent of respondents said that they would be looking to get a new contract in order to secure an upgrade to the latest model of handset.

In contrast, a quarter of those polled said that they intend to keep their present model and look for the best SIM-only deals they could find on the market. 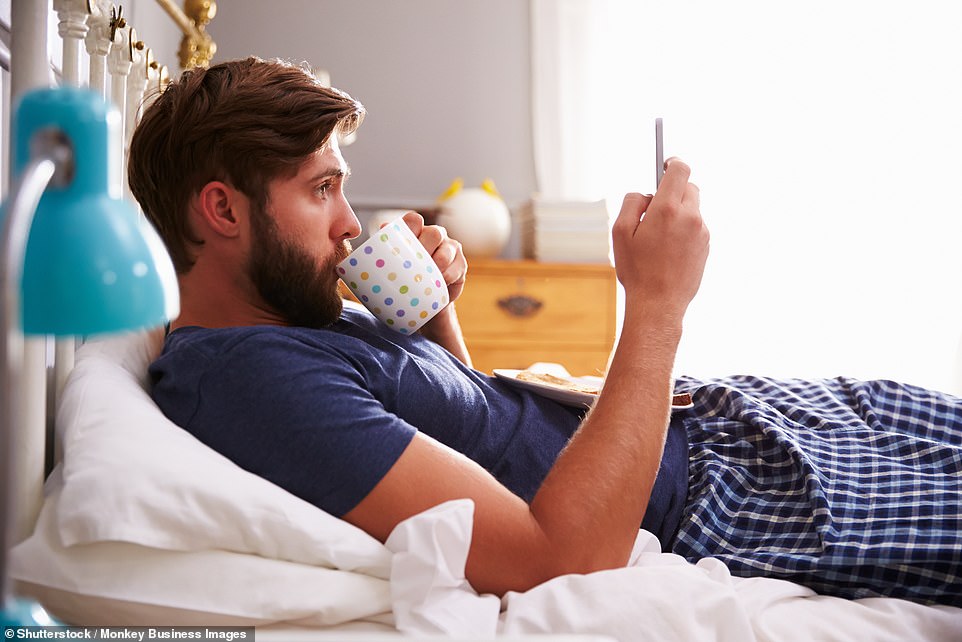 ‘The British public are wasting up to £180 a year on their data plans,’ said Lebara’s UK Mobile Commercial Director, Rajesh Dongre.

‘But once they are out of their contracts, they can start to shop around and find a plan that works for them,’ he added.

‘At Lebara we pride ourselves on the fact that our SIM Only deals can be changed every month, giving the flexibility customers deserve.’

The full findings of the survey were published on the Lebara website. 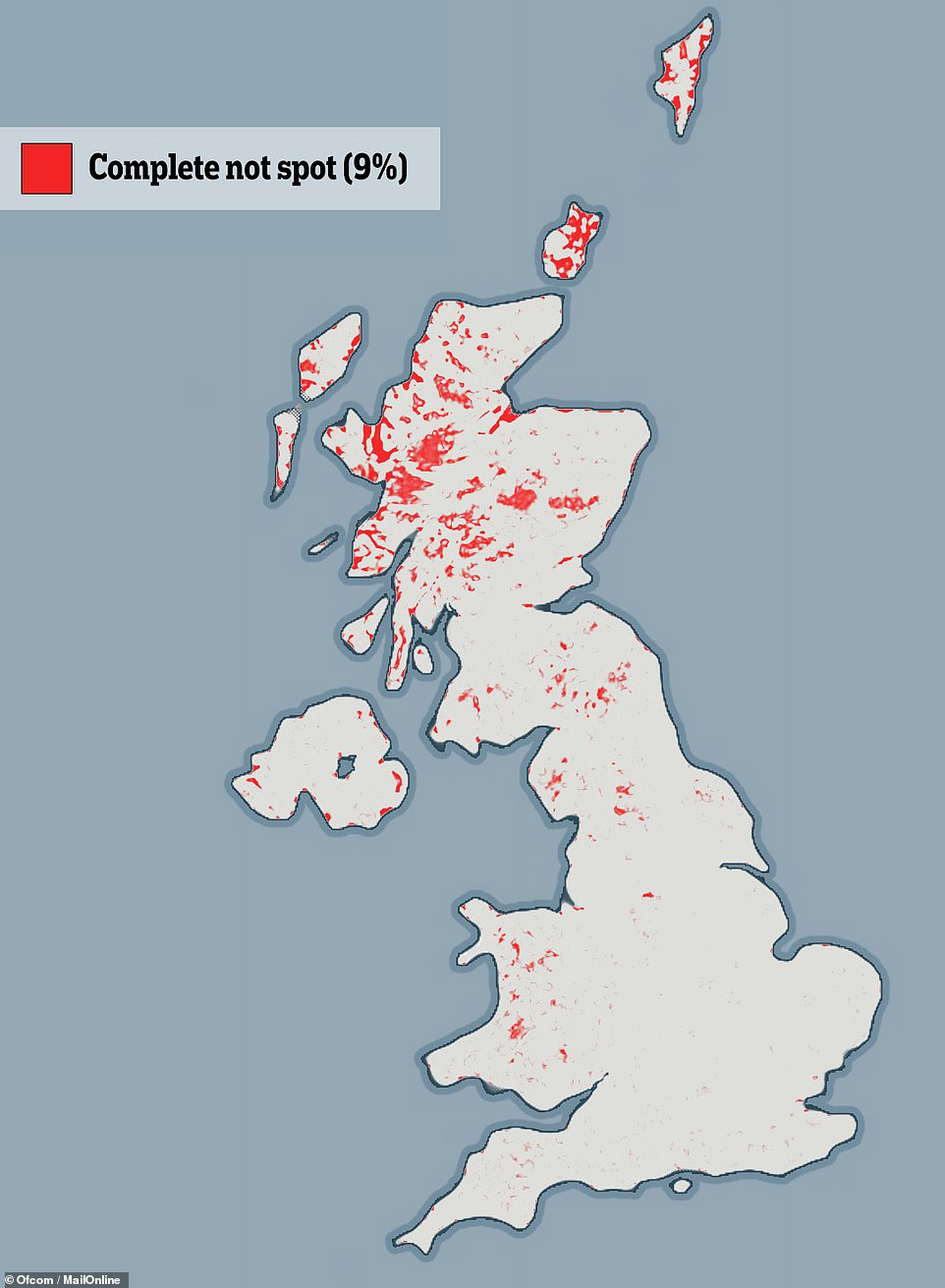 Pictured: a map of the United Kingdom showing the complete and partial 4G ‘not spots’ in the that have little or no coverage, according to industry regulator Ofcom

WHERE ARE THE WORST PLACES FOR 4G & BROADBAND IN THE UK?

According to consumer rights advocate Which?, Scotland and Wales suffer the most from both poor broadband connections and limited 4G coverage.

Also notably impacted were constituencies made up predominantly of urban areas — including parts of Canterbury, Macclesfield, Maidstone, Norfolk, Southampton, Surrey and York.

These were joined by many seaside towns — including Dover, Cleethorpes, Great Yarmouth, Scarborough, Totnes and Whitby.

The Highlands and Islands were the most affected parts of Scotland, with the constituency of Na h-Eileanan an lar most poorly provided for with only 42 per cent of properties covered by all four network operators and only 81 per cent having a decent broadband connection.

In Wales, the constituency of Dwyfor Meirionnydd was worst off, with only 69 per cent of premises having 4G coverage from all four network operators and only 91 per cent having a decent broadband connection.

Meanwhile, Northern Island was also poorly served — especially in urban areas — with Armagh and Newry worst hit, with only 82 per cent of premises. 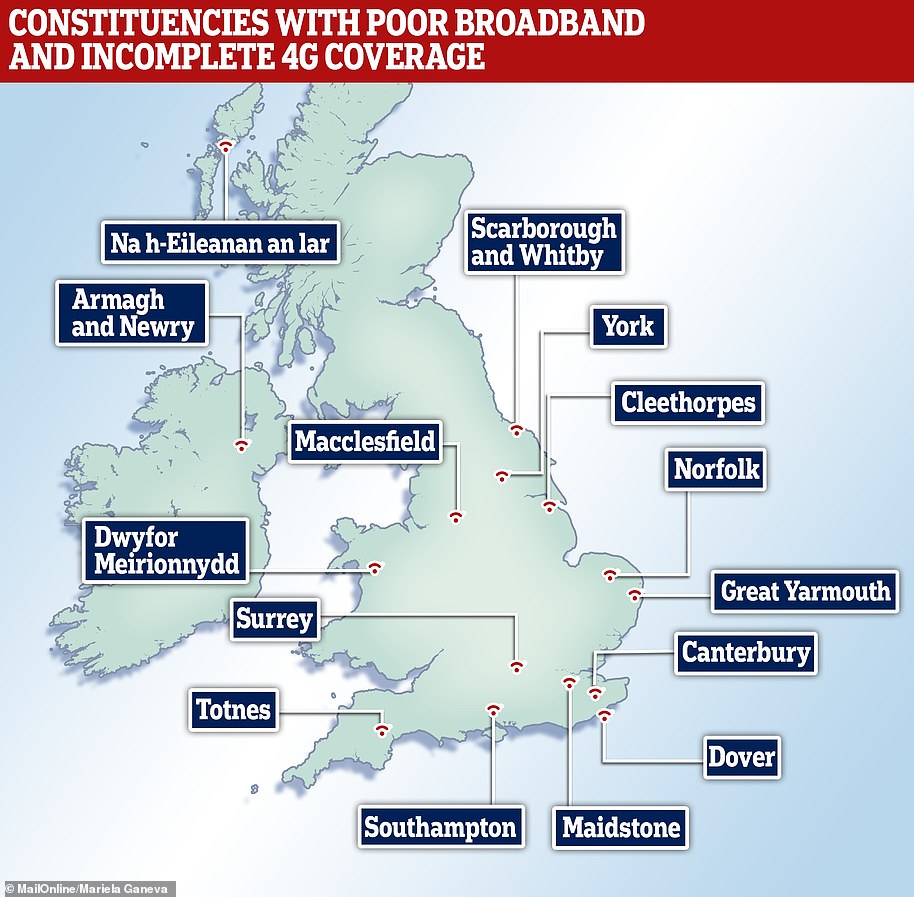 According to consumer rights advocate Which?, Scotland and Wales suffer the most from both poor broadband connections and limited 4G coverage