Ahead of Samsung’s Galaxy Unpacked event reportedly scheduled for August 11, every product that the company is gearing up to launch has leaked online. We first saw the renders of the upcoming Galaxy Z Fold 3 and Galaxy Z Flip 3 leak a couple of weeks ago. And now, reputable tipster Evan Blass has shared renders of the entire lineup of products Samsung is expected to launch next month.

Blass shared a long thread of tweets containing the GIFs of all the upcoming products. These include the two Galaxy foldable devices, the Galaxy Watch 4 series, the Galaxy Buds 2 TWS earbuds, and the much-awaited Galaxy S21 FE.

First off, let’s about the Galaxy Z Fold 3. It will reportedly be the first Samsung device to feature an Under-Display Camera (UDC), which means you will have a true bezel-less foldable display on the inside. The device is also expected to come with S Pen support as Samsung aims to bring the signature feature of its Note series, which is canceled for this year, to its foldable lineup.

The Z Fold 3 appears in three color variants – Black, Green, and White. Other than this, we can see the triple camera setup at the back and the punch-hole selfie snapper on the cover display. It will be powered by the Snapdragon 888 or Exynos 2100 5G chipset, a 4,500mAh battery, and more.

Coming to the next foldable, the clamshell-designed Galaxy Z Flip 3 is also reported to debut at the August event. As per recent rumors, the device is expected to come with a bigger 1.9-inch cover display than its predecessors and a new dual-tone design. Also, we can see that the primary cameras now assume a vertical orientation as opposed to the horizontal alignment in its predecessor. 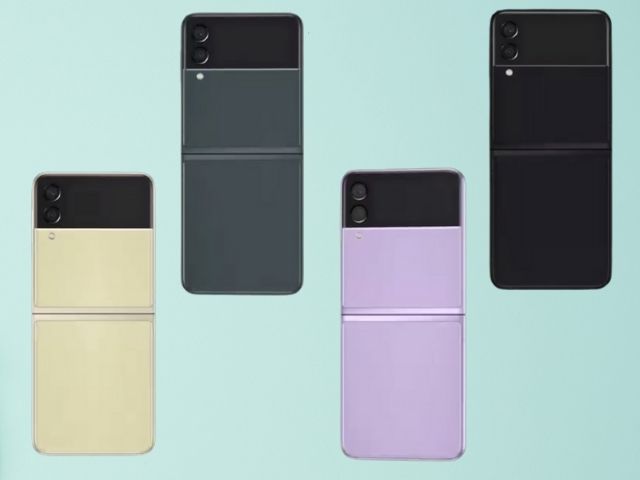 The device is also expected to be powered by the flagship Snapdragon 888 chipset. It is rumored to be priced around $1,200, making it a cheaper offering than the original Z Flip. In Blass’ tweet, the Galaxy Z Flip 3 is shown in four color variants – gold, olive, black, and purple.

The Galaxy S21 FE is a much-anticipated device that will also reportedly release during the upcoming Galaxy Unpacked event. In a leaked product roadmap of Samsung, we saw that the device might launch sometime in August. So, if the company unveils the Galaxy S21 FE on August 11, we would not be surprised.

Moreover, now that Blass has shared the render of S21 FE in his leak thread on Twitter, it is very much possible that the device will launch on the said date. As per Blass, the device will come in four colors – White, Gold, Purple, and Black. However, as per a previous leak, there will also be an Olive Green color variant of the S21 FE.

The device is expected to feature a 6.4-inch display and a glasstic back panel, as per a previous leak by OnLeaks. It will also boast a triple-camera setup at the back, much like the standard Galaxy S21 series. However, due to the low pricing, the Galaxy S21 FE will reportedly boast lower-end lenses. Other than this, not much is known about the device as of now.

So, according to Blass’ tweets, the Galaxy Watch 4 Classic will come in three colors – Black, Grey, and White. It is rumored to feature a rotating bezel for navigation and a couple of control buttons on its edge.

Both the upcoming Galaxy Watch devices, as reported earlier, will run the new Wear OS-based One UI Watch skin, which the company recently showcased at MWC 2021.

Other than these, Blass has also shared the renders of the upcoming Galaxy Buds 2 TWS earbuds. It will be a successor of the Galaxy Buds+ and will reportedly come in a newly designed charging case.

As per the tweet, the Galaxy Buds 2 will come in three color variants, including green, purple, and white. However, in a previous render leak report, we saw a black-colored model as well.

So, these are all the products that Samsung is expected to launch at its upcoming Galaxy Unpacked event next month. Although the company has not officially confirmed anything about these products or the event date, considering Blass’ track record, it is highly likely that Samsung will hold the event on August 11. Are you excited about the next Galaxy Unpacked event? Let us know your thoughts in the comments below.