It’s raining fish! Moment thousands of juvenile fish are dropped from a plane into Utah lakes as part of plan to restock 200 bodies of water that can’t be reached by trucks

By Dan Avery For Dailymail.com

We’ve all heard of flying fish, but thousands of juvenile trout took a nosedive from an airplane as part of the Utah Division of Wildlife Resources efforts to replenish lakes.

Video released by the Division on Friday showed countless ‘fingerlings,’ or fish under the age of one, released last week from a chute as the plane flew over some 200 high-elevation lakes across Utah that are not accessible by other means.

The plane holds hundreds of pounds of water and can drop 35,000 fish in a single flight without reloading, the division said in a Facebook post.

The department indicated the fish are just one to three inches long and ‘flutter down slowly’ to the water.

‘The air slows their drop and they fall a bit like leaves. The slower fall allows the fish to survive. If the fish were larger, the survival rate would not be as high.’ 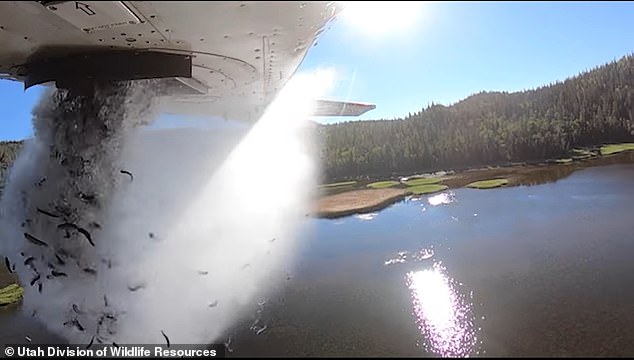 The Utah Division of Wildlife Resources released thousands of fingerlings, or juvenile fish, into remote lakes to help replenish their numbers

According to a blog post by DWR biologist Matt McKell, fish are most often transported via a truck fitted with giant holding tanks that pulls up to a lake or stream, ‘attaches a pipe to the tank outlet, opens a chute, and the fish slide directly into the water.’

But these lakes are too remote to reach via truck, McKell said. In the past, horses were loaded with metal milk cans filled with water and fish and trotted out to the high-altitude waterways.

‘Depending on the area and the condition of roads or trails, fish are also transported to remote areas on foot with buckets or a backpack, or by four-wheeler,’ McKell explained. ‘ 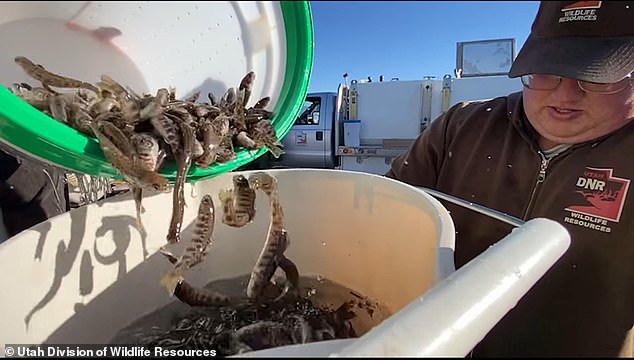 Because the fish are so small—just 1-3 inches—they tend to flutter down to the water, experts say. The survival rate is between 95 and 99 percent

‘Horses are still used at times to get fish into hard-to-reach places. Recently, in northern Utah a particular situation required a little creativity to take fish to a remote section of a small stream on the Wasatch Front.’

McKell even recalled putting water and fish into a backpack lined with a heavy duty trash bag in 2015, then hiking up a canyon before releasing the fingerlings into a stream.

At the same time, severe drought conditions have meant some bodies of water are not being restocked with fish. 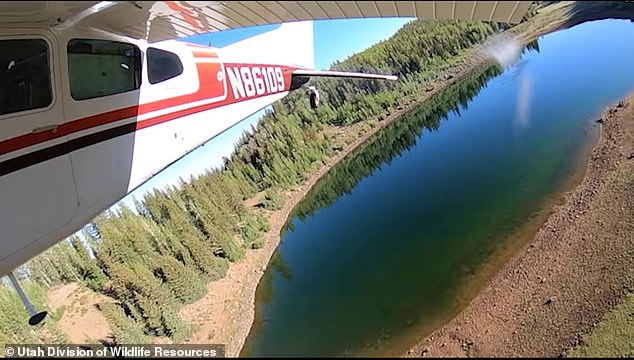 Aerial fish stocking has been used in Utah since the 1950s. In the past, horses were loaded with metal milk cans filled with water and fish and trotted out to the high-altitude waterways 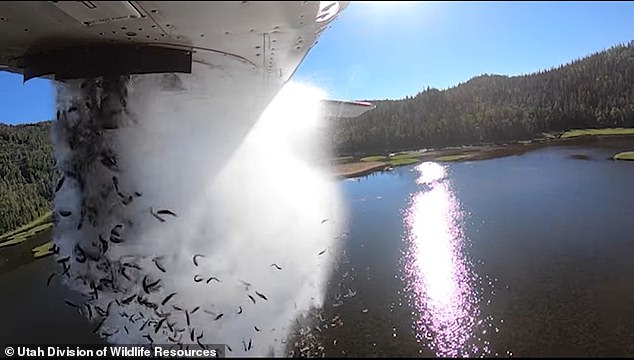 The planes are stocked with thousands of gallons of water and can release some 35,000 fish in a single trip. But severe drought conditions have meant some bodies of water are not being restocked

And limits on fishing are being raised to prevent fish from dying in rising water temperatures, KUTV reported.

Workers at the Logan Fish Hatchery told the network they typically raise 250,000 fish for breeding, research, or to stock Utah’s waters for sport every year or two, but have stocking some bodies of water because of low water levels and rising temperatures.

‘It is by far the worst I’ve seen,’ hatchery manager Gary Howes said.

‘It affects everything – mostly just the number of fish that would be stocked.’