Small bottles worn around the waists of Stone Age Europeans over 6,000 years ago may have been the first makeup bags, according to new research.

Analysis of trace ingredients found in a ceramic bottle in Slovenia, dating from between 4350 and 4100 BC, indicated it contained beeswax, animal fat and lead-based cosmetic.

If the contents were indeed the equivalent of prehistoric Maybelline, that would mean makeup was in use in Europe more than 2,000 years earlier than previously thought.

The discovery also places makeup use in the West hundreds of years before the earliest evidence of cosmetics in ancient Egypt and Mesopotamia.

Small jars found in Croatia and Slovenia dating to between 4350 and 4100 BC were likely used to carry cosmetics, according to new research

Bine Kramberger, an archaeologist at the Institute for the Protection of Cultural Heritage of Slovenia, originally found a miniature ceramic bottle in Zgornje Radvanje, Slovenia, in 2014.

The vessel was located at a site occupied in 4350 BC by the Lasinja, a prehistoric people descended from hunter-gatherers in Western Europe.

Over a hundred similar bottles have been unearthed in the region, mostly attributed to the Lasinja in the southeastern foothills of the Alps or the Vinča Culture in the Central Balkans.

Initially it was assumed these were children’s toys, due to their small size and resemblance to animal and human heads, New Scientist reported. 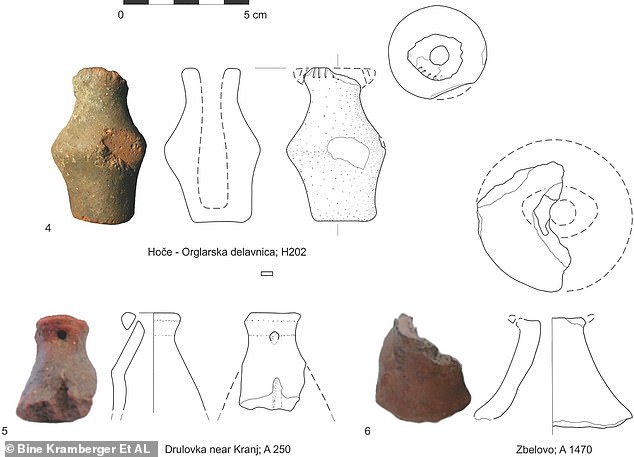 Analysis of the jars found traces of beeswax, plant and animal fat, and a white lead-based substance known as cerussite used for centuries in cosmetics 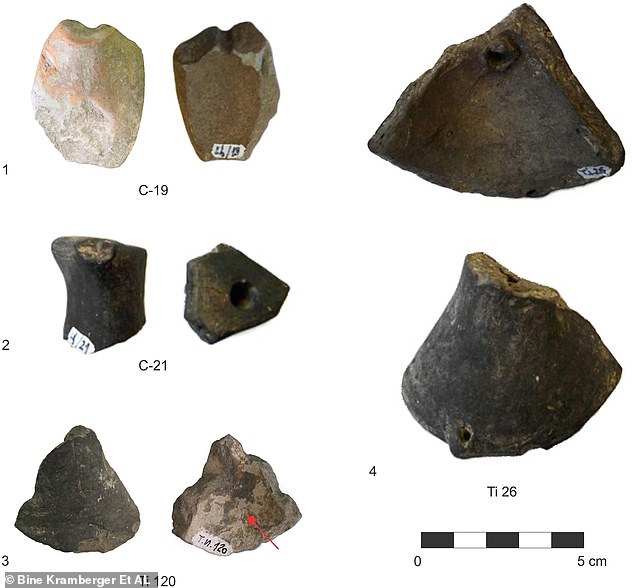 Broken fragments of similar bottles were uncovered in Zgornje Radvanje, Slovenia, and other sites in the region, all containing the white substance

But most of the bottles had holes in their handles, suggesting they would have been strung on rope or leather and worn around a person’s neck or waist.

Kramberger analyzed the vessel he found and, according to his findings published in the Journal of Archaeological Science: Reports, discovered it contained a solid white lead-based substance known as cerussite,

Cerussite, also known as ‘white lead’ or lead carbonate, has been used in cosmetics throughout history, though this practice has mostly ended because the substance is so toxic. (It was the key ingredient in lead-based paints, the chief cause of lead poisoning in children.)

Long, thin stone tools found nearby might have been used to extract the cerussite inside.

Kramberger said the finding was exceptional, as ‘we rarely find vessels that still retain remnants of their former content.’

He and his team analyzed more than a dozen other vessels from the same era and discovered they, too, contained cerussite and other lead minerals.

The use of lead in central and southeast Europe dates to about 6,400 years ago, the same time frame as the portable jar. 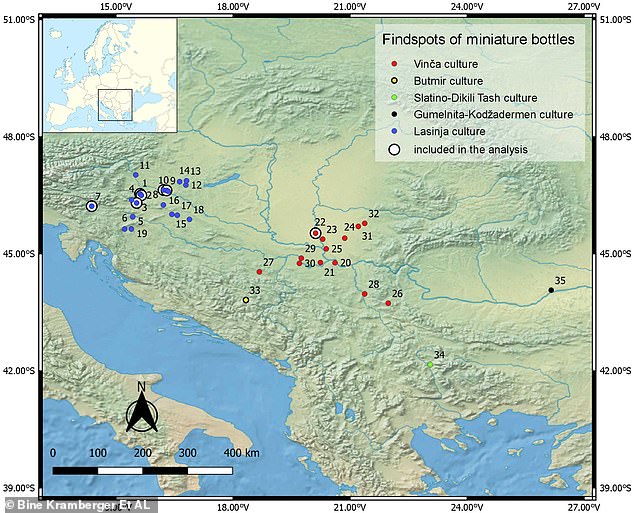 The arrangement of vessels found in southeast Europe, most associated with the Lasinja in the southeastern foothills of the Alps or the Vinča Culture in the Central Balkans 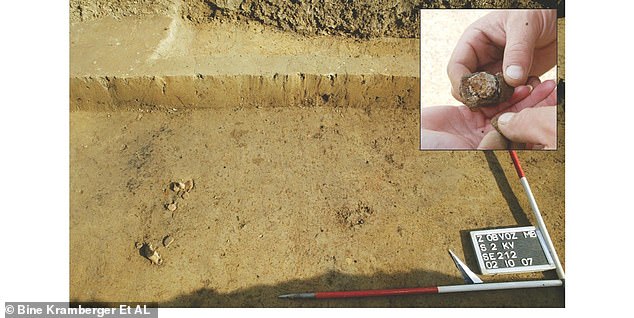 Pictured: The dig site at Zgornje Radvanje. The research, published in the Journal of Archaeological Science: Reports, pushes back the use of cosmetics in Europe at least 2,000 years

Some of the jars Kramberger studied also had plant oil, animal fat, and beeswax—which would help keep the skin hydrated and soft.

‘Miniature vessels were, for far too long, considered to be children-related, and there is no denial that some probably have been,’ Bisserka Gaydarska, an archaeologist at England’s Durham University not involved in the study, told New Scientist.

‘But I know that there was a much more diverse use of small vessels—and medicinal and cosmetic containers is as good as any.’