Scientists have discovered a process to break hard-to-recycle plastics into ready-to-use fuel.

The procedure combines two materials found in common household products to break down the plastic over just a few hours.

After the catalysts break the plastic into carbon molecules, hydrogen molecules are added to stabilize the results for use as jet and diesel fuel.

According to the researchers, the process is quick, carbon neutral and requires approximately 50 percent less energy than other technologies.

And it works on different plastics—even when they’re mixed together—meaning less resources would have to be spent sorting. 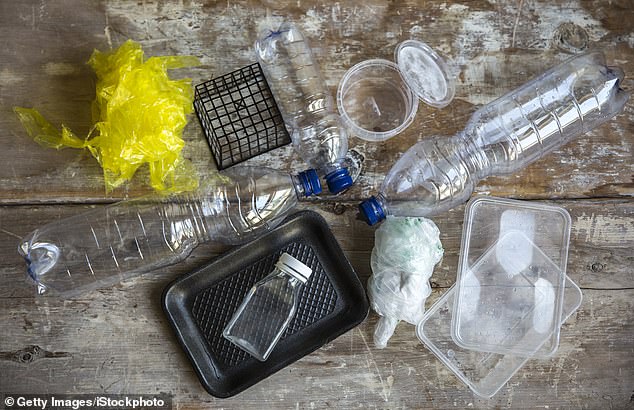 Scientists at the University of Delaware have developed a process to break down polyolefins, a kind of plastic that’s incredibly hard to break down but responsible for most plastics on Earth

Polyolefins are versatile plastics that account for up to 70 percent of all plastics made today, including shopping bags, wet wipes, coffee k-cups and disposable utensils.

But they’re also the hardest to recycle, leading to millions of tons of plastics ending up in landfills every year.

Researchers from the University of Delaware’s Center for Plastics Innovation (CPI) have figured out how to turn these single-use plastics into fuel molecules.

It can be done in just a couple hours at around 480 degrees Fahrenheit — a little hotter than it takes to bake a potato — and works on a variety of plastics. 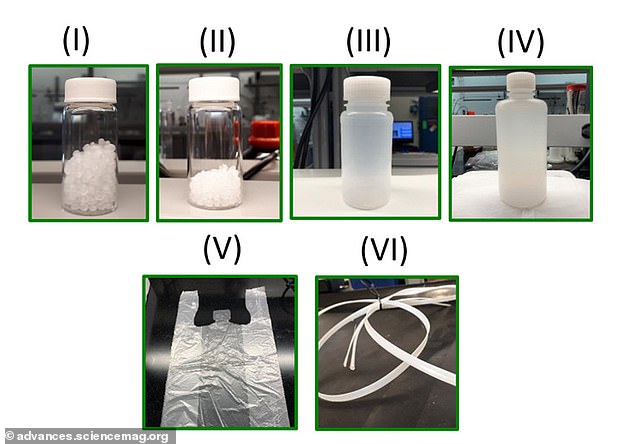 Hydrocracking breaks down plastic solids into smaller carbon molecules and then adds hydrogen molecules to stabilize the resulting material for use.  The researchers used zeolites, found in water softeners, and mixed metal oxides, found in antacids, as catalysts for the reaction

“Chemical conversion is the most versatile and robust approach to combat plastics waste,” said lead author Dion Vlachos, a professor of chemical and biomolecular engineering at UD and director of the Delaware Energy Institute.

Vlachos and his colleagues used a chemical process called hydrocracking, which breaks down plastic solids into smaller carbon molecules and then adds hydrogen molecules to stabilize the resulting material for use.

The scientists sparked the reaction by combining zeolites and mixed metal oxides. 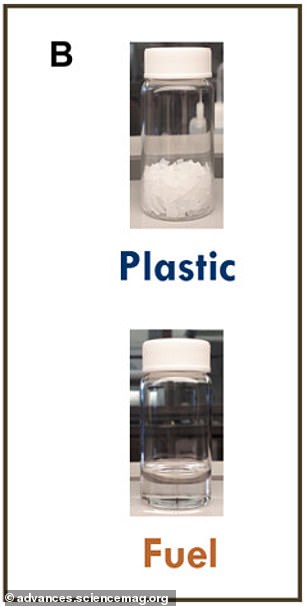 Polyolefins before and after hydrocracking

Each one is a poor catalyst alone, Vlachos said, ‘Together, the combination does magic, melting the plastics down and leaving no plastic behind.”

They then stabilized ther results by adding hydrogen molecules, resulting in a substance that can be used to create jet fuel, diesel or lubricants.

The process is carbon neutral and requires approximately 50 percent less energy than other technologies, according to their new report in the journal Science Advances.

Both zeolites and metal oxides are abundant and fairly inexpensive, but Vlachos acknowledged more work needs to be done to translate his results in the lab into a practical application in the field.

“These are not exotic materials, so we can quickly start thinking about how to use the technology,” he added.

What to do with the millions of tons of plastics produced every year has become a major crisis.

Less than 9 percent of plastic waste is recycled in the US, with over three-quarters ending up in landfills.

The remainder is burned, which releases toxic chemicals into the atmosphere.

Earlier this month researchers at the University of California Berkeley announced they had developed a truly biodegradable plastic that breaks down in just a few weeks.

They embedded polyester-eating enzymes, protected by a special polymer wrapping, into polyester plastics as they were made.

When exposed to heat and water, according to their report, the enzymes are released from their wrappers and digest the plastic, turning it into lactic acid which can be used to feed soil microbes found in compost.

The enzyme-laced plastic does not produce microplastic pollutants when it breaks down, with 98 percent of it degrading into small molecules.

‘But if it turns out that it creates more problems than it’s worth, then the policy might revert back,’ she added.

‘We are basically saying that we are on the right track. We can solve this continuing problem of single-use plastics not being biodegradable.’

The problem with conventional plastics is that they are inherently designed not to break down — great for normal use, but unhelpful for the environment later when they’re discarded.

The most durable plastics have an almost crystal-like molecular structure, with polymer fibers that are so tightly aligned polymer-eating microbes can’t get in from the outside.

Xu and her colleagues add the microbes to the plastic before it’s made into the final product.