What a crunch! Scientists record the ‘shell-crushing’ sounds of a ray chomping on shellfish to access the prey’s soft tissues for the first time

By Joe Pinkstone For Mailonline

Scientists have eavesdropped on dinner time for the large marine predator the whitespotted eagle ray for the first time in order to learn more about how it eats.

Underwater recordings show the animals trawling the seabed and sucking up large shellfish before using their powerful mouths to crush them before swallowing.

This feeding mechanism has long been known, but has been hard to study and record due to the elusive nature of the animals. 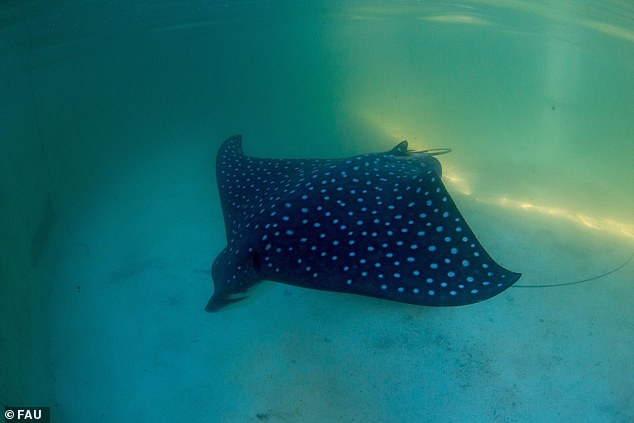 The recordings capture the moment the predator smashes the shell of molluscs, including oysters, clams and conchs.

They do this in order to get to the soft interior of the animal which is protected by the hard shell.

Analysis of the sounds revealed the type of prey being eaten from as far away as 330ft (100m) from the cracking sound alone.

‘Passive acoustics-based documentation of shell-crushing behaviour has not been seriously considered as a tool to identify the ecological role of large, mobile molluscivores before this study,’ lead author Dr Matt Ajemian from Florida Atlantic University.

‘We knew from previous experience with these animals that the cracks they made during feeding were loud, almost like an explosion, but there were no data to support it at the time. That’s what led us to conduct this initial study.’

‘Molluscs vary in texture, thickness and strength. The differences we observed in consumption signals and behavior associated with the two primary prey types analyzed are likely due to variations in these shell shapes,’ said Kim Bassos-Hull, co-author of the study.

The recordings capture the moment the predator smashes the shell of molluscs, including oysters, clams and conchs. They do this in order to get to the soft interior of the animal which is protected by the hard shell

‘It was clear that hard clams took a considerably longer time to process than banded tulip shells and all other gastropods.

‘This was likely driven by the greater number of fractures rays needed to implement during processing and winnowing of hard clams presumably to access the prey’s soft tissues.’

The researchers hope the development of the technology will allow non-invasive ways of monitoring  how many clams are being eaten by large predators like rays.

The findings are published in the Journal of Experimental Marine Biology and Ecology.

Two female eagle rays have given birth to pups at an aquarium despite having no contact with a male in two years.

Nibble and Spot gave birth at the same time as each other on New Year’s Eve without a male companion, intriguing aquarists and scientists.

The two females reside in the Fish Tunnel display at SEA LIFE Kelly Tarlton’s Aquarium in Auckland, New Zealand, which currently does not house a male eagle ray.

Aquarium staff are trying to work out whether the pups were conceived through a process called parthenogenesis known as a ‘virgin birth’ or by sperm storage.

‘Whilst we were surprised to see Nibble and Spot give birth to pups because they haven’t been with a male in two years, it’s not completely unheard of,’ Andrew Christie, Curator at SEA LIFE Kelly Tarlton’s, told Daily News.

‘It could have occurred through a process called parthenogenesis, which is a rare reproductive strategy where an embryo develops without fertilisation.

‘Alternatively, Nibble and Spot could have stored sperm inside their bodies for the last two years.

‘Sperm storage has been recorded in several shark and ray species, so we think this is the more likely scenario.’