They are the menace of seaside holidays, brazenly snatching ice-creams and chips right out of people’s hands.

But scientists have come up with a way to stop seagulls stealing food, by staring them straight in the eye.

Cocky as they appear, seagulls are far less likely to take food when someone is looking at them, researchers found.

In a study of herring gulls using a bag of chips as bait, almost a third of gulls didn’t dare to touch it when a person was making eye contact but would when they looked away.

Even those bold enough to try to steal the chips were much more nervous about doing so, with some taking almost five minutes longer to go up to the food. 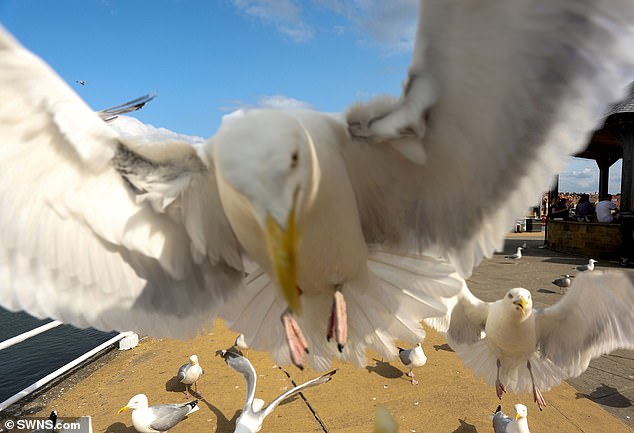 Seagulls are less likely to steal your food if you make eye contact with them, a University of Exeter study has found (file photo)

HOW CAN I STOP SEAGULLS STEALING MY FOOD?

A study from researchers at the University of Exeter has identified a number of techniques for stopping seagulls from stealing food at the seaside.

It found that out of 74 gulls, more than 60 per cent would avoid approaching a bag of chips if a human was nearby.

The study also found that just 19 would approach the food when someone was looking at them – and six of them would be too scared to take the chips.

Hiding out of sight or eating indoors is also an option to stop food theft.

Birds may be intimidated if you wave your arms to scare them away.

The birds may have quickly learned that people who make eye contact are more likely to chase them away, so a warning glance is all that is needed to deter them.

The findings provide a much-needed strategy for holidaymakers, who could keep hold of their pasty or ice-cream cone by simply keeping an eye out for urban gulls.

Madeleine Goumas, first author of the study from the Centre for Ecology and Conservation at the University of Exeter, said: ‘It seems very likely that just a small change in human behaviour might actually reduce the chance of someone losing their food to a gull, which would be great to reduce the conflict that seems to be occurring in some areas between humans and gulls.’

Senior author Dr Neeltje Boogert, also from the University of Exeter, said: ‘Especially now, during the summer holidays and beach barbecues, we are seeing more gulls looking for an easy meal.

‘We therefore advise people to look around themselves and watch out for gulls approaching, as they often appear to take food from behind, catching people by surprise. It seems that just watching the gulls will reduce the chance of them snatching your food.’

Large, noisy herring gulls are on the UK’s Red List of Birds of Conservation Concern, as their numbers have declined by 60 per cent between 1969 and 2015.

However they are on the rise in coastal towns and cities, having swapped clifftop nests for roofs and the fish they feed on at sea for human food scavenged from the streets. 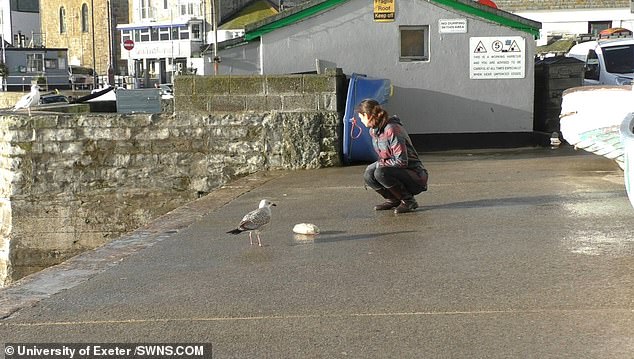 The researchers used a bag of chips as bait for the herring gulls in various coastal Cornish towns. One bird stole the food within six seconds when a researcher was looking off to the side (pictured) 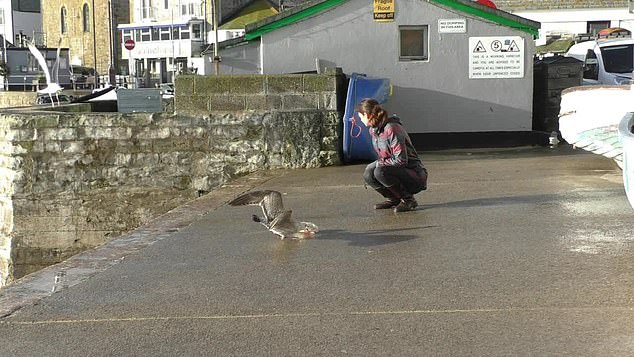 Looking away the seagull goes for the chips 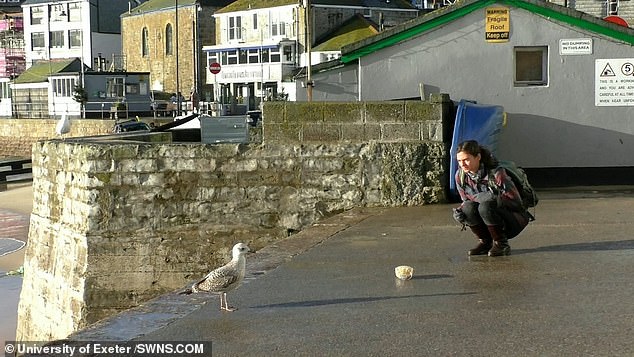 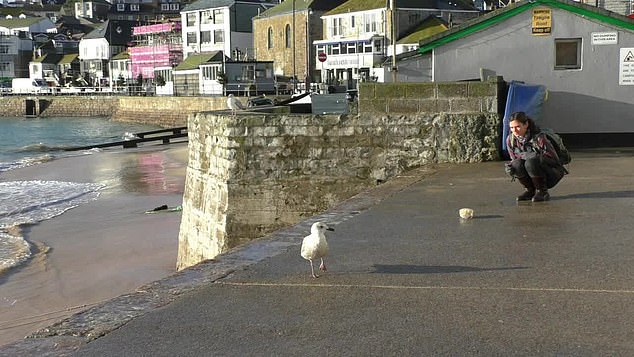 Looking at the seagull, it doesn’t go for the chips

Researchers set out to see if eye contact could deter the gulls in various Cornish coastal towns, targeting 74 birds.

Reassuringly, they found most birds will not take food when it is close to humans, with 47 gulls flying away or keeping their distance and only 27 approaching the chips.

For those birds that did approach, eye contact stopped most in their tracks.

One bird stole the food within six seconds when a researcher was looking off to the side. But it waited the whole five-minute duration of the experiment without touching it when she stared in its direction.

The study, published in the journal Biology Letters, included 19 seagulls which approached food both when a human was looking at them and looking away.

All of these birds touched the chips when they weren’t being looked at, but six were too fearful to do so when eye contact was made.

In the group of 19 seagulls as a whole, the birds took an average of 21 seconds longer to approach the food when eyes were on them.

A small number approached just as quickly when someone was looking at them however.

Miss Goumas added: ‘We didn’t examine why individual gulls were so different – it might be because of differences in ‘personality’ and some might have had positive experiences of being fed by humans in the past – but it seems that a couple of very bold gulls might ruin the reputation of the rest.’